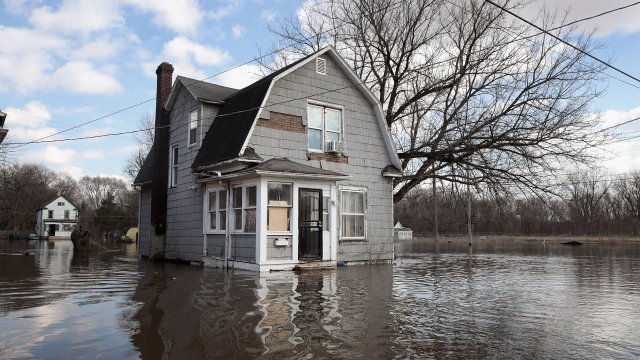 As parts of the Midwest recover from historic flooding, Congress is debating the reauthorization of a government run flood insurance program.

The federal government backs most flood insurance policies through the National Flood Insurance Program or 'NFIP.' The program has been around since 1968, but in recent years has struggled to stay financially afloat.

Catastrophic storms such as Hurricanes Katrina, Harvey, Maria and Florence triggered billions in insurance claims. Experts say things could get a lot worse due to climate change in the near future.

The program expires May 31st and lawmakers have previously pitched major reforms that would require some policy holders to relocate from flood prone areas and allow more private insurers to take on some of the risk.

But fixes to the program alone won't help many of those most vulnerable to flooding.  A Newsy analysis found there are just over 5 million flood insurance policies in the United States, while about 13 million homes are located in flood prone areas.

They are people like Mojan Bagha, whose business flooded twice  before he purchased insurance. Now he's thinking about moving his oriental rug store after repeated floods in the area and the high costs of insuring the property.

Bagha, who shared this video with Newsy of last year's flood, says he can sympathize with people who are affected by flooding in the Midwest, but he hopes leaders address what he sees as a global problem.

"Let's plan to prevent this disaster from [happening] again," Bagha added. "However we don't realize that this is a climate and this is [an] environmental issue. It's happening more and more. What happened in Texas, what happened in Florida, what happened in Puerto Rico [and] what happened years ago in New Orleans these are all connected."