Congress Has Hearing On UFOs, But No Confirmation Of Extraterrestrials 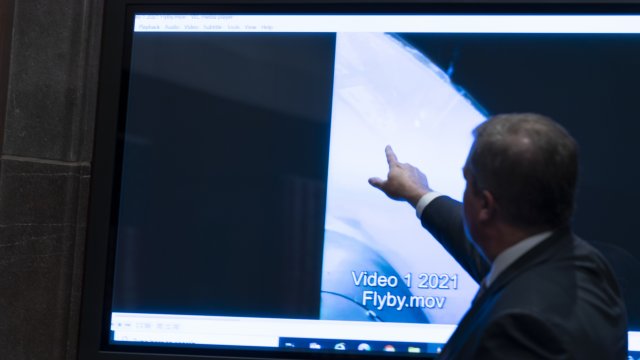 Congress held its first hearing on unidentified flying objects in half a century, but lawmakers are digging more into "unidentified aerial phenomena."

Strange flashing green triangles recorded in the skies off the U.S coastline are apparently not little green men — they’re drones.

"We're now reasonably confident that these triangles correlate to unmanned aerial systems in the area," said Scott Bray, deputy director of naval intelligence. "The triangular appearance is a result of light passing through the night vision goggles and then being recorded by an SLR camera. "

Bray said the triangles are one of the few UAPs — or unidentified aerial phenomena, in government-speak — that investigators can identify.

A government report released last year said that out of 144 UAP incidents like these spotted by military pilots, only one could be identified — as a large deflating balloon.

At the first public hearing on UFOs in half a century, lawmakers quizzed Pentagon officials behind a UAP task force about what these might be and whether they threaten national security.

"Should one of our adversaries have developed a technology we don’t know about, we need to know about it yesterday," said Rep. Jim Himes of Connecticut.

With so many unexplained sightings, the hearing naturally turned to the possibility that alien explorers might be making Earth a stop on a galactic road trip.

"No one knows whether there's extraterrestrial life," said Rep. Peter Welch of Vermont. "It's a big universe."

"There are elements in our government that are engaged in looking for life and other places, and they have been doing that for decades," Moultrie said. "We’re a part of that same government, and so our goal is not to potentially cover up something if we were to find something — it's to understand what may be out there."

Officials now say they have 400 reports of these sightings, most unexplained. But they say pilots are becoming more willing to report what they’re seeing, and the UAP task force hopes those reports help solve a few mysteries.