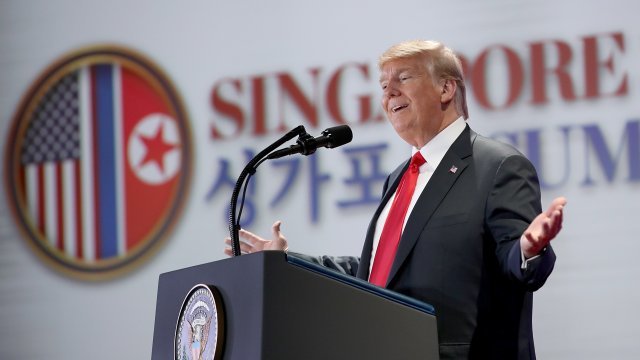 Members of Congress are still pretty split on whether the Trump-Kim summit was a success.

Once the talks between President Donald Trump and North Korean leader Kim Jong-un ended, the reactions from Congress quickly poured in. On the GOP side, Senate Majority Leader Mitch McConnell applauded the progress made so far.

"As Secretary [Mike] Pompeo has reiterated, the goal of the United States is the 'complete, verifiable, and irreversible denuclearization of the Korean peninsula,'" McConnell said. "If North Korea does not prove willing to follow through, we and our allies must be prepared to restore the policy of maximum pressure. Today, I congratulate the president on this major step and share his hope that it will begin a process that leads to an historic peace."

Other Republicans, like Sen. Marco Rubio, expressed doubt over the possibility of peace. He wrote on Twitter: "Limits to future strategic weapons instead of eliminating current program not an acceptable outcome. Hope I’m wrong but still believe they will never give up nukes & ICBM’s unless believe failure to do so triggers regime ending reaction."

Over on the other side of the aisle, there was just as much of a mixed bag. Senate Minority Leader Chuck Schumer criticized Trump for having a meeting with the North Korean leader, which he believes granted Kim's "brutal and repressive dictatorship" international legitimacy.

The summit between President Donald Trump and Kim Jong-un will likely burnish the images of both leaders.

But not all Democrats were as critical. In a statement, Sen. Joe Donnelly said, "Progress toward reducing the nuclear threat from North Korea is laudable, but the details moving forward will be critically important."

Prior to the summit, Republican Sen. Jim Risch told CNN that Trump, Vice President Mike Pence and Secretary of State Mike Pompeo all said they plan on putting together a Senate treaty on any nuclear deal with North Korea.