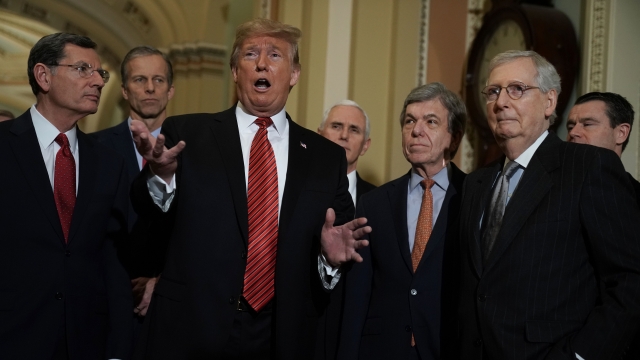 The Republican-controlled Senate voted against Trump administration policies twice in one week.

The relationship between President Trump and the Republican-controlled Senate might be starting to fray after members of the GOP joined with their Democratic counterparts on two key votes. A total of 12 GOP senators voted in favor of a resolution to overturn President Trump's declaration of a national emergency at the southern border.

The president already announced on Twitter that he'll fight the resolution, writing: "I am prepared to veto, if necessary. The Southern Border is a National Security and Humanitarian Nightmare, but it can be easily fixed!" He declared a national emergency in February in order to avoid another shutdown and circumvent Congress to get funding for the border wall, a key issue of his presidency. But it's not the only veto he could be issuing.

One day earlier, the Senate voted to end military assistance to Saudi Arabia for the war in Yemen, which the president is also expected to reject. Ahead of both votes, U.S. Sen. Mike Lee — who originally tried to negotiate with the White House on the emergency declaration resolution — expressed that the Republican opposition isn't an attack on the Trump administration.

"Congress has handed over this power lock, stock and barrel to the executive," Lee said at a press conference on Wednesday about both resolutions. "It has sadly occurred under the leadership of Houses of Representatives, Senates and White Houses of every conceivable partisan combination. I consider both parties equal opportunity offenders, and this is a step in the right direction."

But that still paints an unclear path ahead for President Trump and the rest of his party in Washington, especially considering the way the Trump administration has framed the debate over the border wall resolution. And it's unlikely that Congress would be able to overturn a veto, which would require a two-thirds vote.