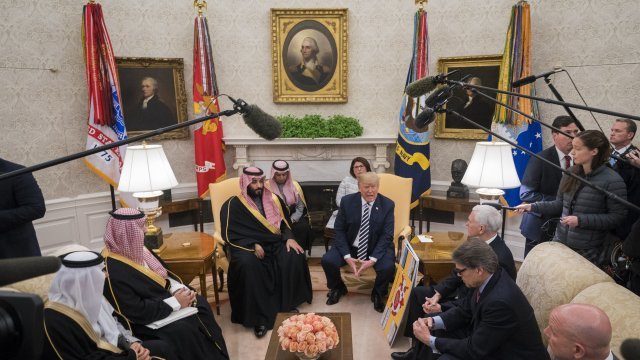 The crown prince of Saudi Arabia might've received a warm welcome from President Donald Trump in Washington, D.C. But in Congress, the reaction was a little mixed.

"This war in Yemen, in my view, has been a humanitarian disaster as a result of Saudi intervention," Sen. Bernie Sanders said.

On Tuesday, Sanders defended a resolution to remove U.S. soldiers from Yemen who are there for any reason other than fighting Al-Qaeda. The Senate voted to table the resolution, putting it off until a later date.

Saudi Arabia is backing the deposed Sunni government in Yemen in a civil war that has claimed thousands of lives.

But, that might not be the end of it. There's a lot of hand-wringing from Congress and from experts alike about the U.S. role in the Saudi-led coalition's operations in Yemen.

That's because of mounting civilian casualties from coalition airstrikes as well as a brutal blockade from the coalition that's contributed to a widespread famine and helped stoke a massive cholera outbreak.

The U.S. supports Saudi Arabia and its allies with refueling missions, intelligence-sharing and military advice.

Senators like Sanders, Mike Lee and Chris Murphy — who all backed the joint resolution that was tabled — want the U.S. support to stop.