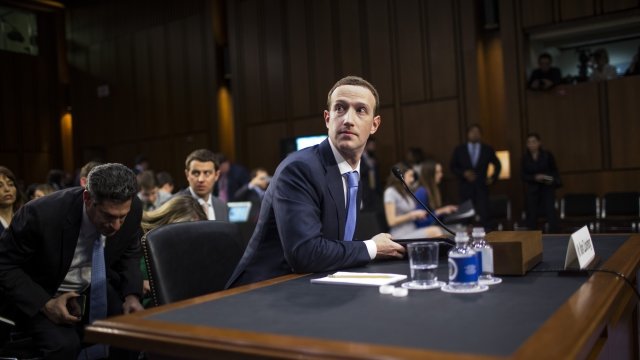 Lawmakers' tough privacy questions for Mark Zuckerberg make some sense: Privacy policies on the modern web can be labyrinthine.

There's a truth to the internet that you might be familiar with if you've ever reused a password or postponed software updates: Just because security and privacy tools exist, doesn't mean everyone benefits from them — or even understands how they work.

This holds true for Facebook, too. Right now lawmakers on Capitol Hill are grilling CEO Mark Zuckerberg about how the everyday user navigates Facebook's privacy and security, because it's not easy.

Facebook has a comprehensive terms of service, and that's by design. Lawyers write these agreements to meet every legal standard required of a company. That means in theory, users can see exactly how their information is used. But when was the last time anyone read one of those cover-to-cover?

"Do you have any idea how many of your users actually read the terms of service, the privacy policy, the statement of rights and responsibilities? I mean, actually read it?" asked Republican Sen. Ron Johnson of Wisconsin.

"Senator, I do not," Zuckerberg said.

"Would you imagine it's a very small percentage?" Johnson asked.

And do we as users have the right to complain about the privacy of our data even if we don't have the patience to dig through the legalese that explains what Facebook does with it? Congress thinks so.

Tim Cook made the comments at a conference in China.

"Don't you agree that companies ought to be required to provide users with clear, plain information about how their data will be used, and specific ability to consent to the use of that information?" asked Democratic Sen. Richard Blumenthal of Connecticut.

"Senator, I do generally agree with what you're saying," Zuckerberg said.

And one thing that could really help:

"Would you agree to an opt-in as opposed to an opt-out?" Blumenthal asked.

What Sen. Blumenthal is suggesting here is that Facebook let users choose how and when they get tracked, instead of getting tracked by default and having to choose to stop it. It would be simpler for everyone, and default privacy would increase.

Zuckerberg noted opt-out makes the advertising experience worse for users and didn't say outright whether Facebook would be willing to change its business model that drastically. But he did admit when lawmakers pressed him that Facebook's default settings could be changed to grant users more privacy.