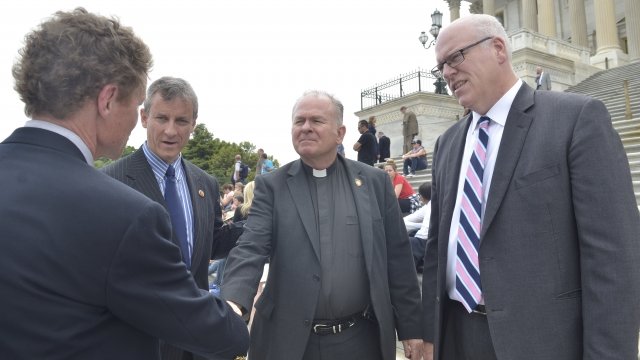 The chaplain for the U.S. House of Representatives has said he won't resign after house members sharply criticized Paul Ryan for forcing him out.

The chaplain for the U.S. House of Representatives is rescinding his resignation. It follows major blowback to House Speaker Paul Ryan telling Rev. Patrick Conroy to head for the door. Ryan says he'll accept it and that Conroy will stay in his job.

Conroy said Thursday he would not resign, saying he doesn't think Ryan asked for his resignation "for cause." He wrote a two-page letter in which he said Ryan never spoke to him in person or sent him any correspondence.

Instead, Conroy says Ryan sent his chief of staff, Jonathan Burks, to tell him Ryan wanted him out. He says Burks mentioned a November prayer in which Conroy seemed to criticize the GOP tax cut plan and said, "Maybe it's time that we had a chaplain that wasn't a Catholic."

For the record, Paul Ryan is Catholic.

Lawmakers on both sides of the aisle have raised questions about why Conroy was asked to resign. Ryan hasn't been very clear about his motivations. He said vaguely that a number of House members "felt like the pastoral services were not being adequately served, or offered."

The House had rejected a Democratic motion to create a panel to review Conroy's dismissal.