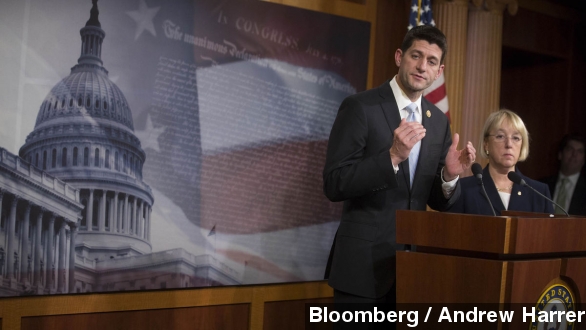 Many Republican lawmakers and high-profile conservative groups spoke out against the deal due to its proposed spending increase.

A budget deal reached Tuesday has support from two of the GOP's biggest leaders in the House: Rep. Paul Ryan and Speaker John Boehner. But the bipartisan deal could still fall flat with rank-and-file Republicans.

JOHN BOEHNER: "They're using our members and they're using the American people for their own goals. This is ridiculous. Listen: If you're for more deficit reduction, you're for this agreement." (Via CNN)

​That was Speaker Boehner defending the budget agreement and lambasting prominent conservative groups that have come out in opposition. Those groups include Americans for Prosperity, Club for Growth, Heritage Action and FreedomWorks — all very influential and well-financed. (Via Los Angeles Times)

​The main issue for many of those groups is that the deal proposes a spending increase to just over $1 trillion, up from the $967 billion set in a 2011 budget deal. About half of that increase reportedly goes to defense.

Still, Michael Needham, the CEO for Heritage Action, wrote, "In the coming days, members of Congress will have to explain to their constituents what exactly they achieved by increasing spending, increasing fees and offering up another round of promises waiting to be broken." (Via USA Today)

Ryan will have to shift from negotiator to salesman with Speaker Boehner as other high-profile conservatives in the Senate— such as Marco Rubio, Ted Cruz, Tom Coburn and Rand Paul — have also come out against the deal. But a Newsweek writer points out some Democrats aren't happy, either.

"The deal does not extend emergency unemployment benefits, which are set to expire on December 28 and will leave 1.3 million long-term unemployed Americans in the lurch."

So both sides will need convincing, but Fox News' Bret Baier predicts both chambers will ultimately pass the deal because of events that have marred Congress in recent months.

Congress has until Jan. 15 to pass a new budget or it will risk another government shutdown. The House is expected to vote on the measure Thursday.