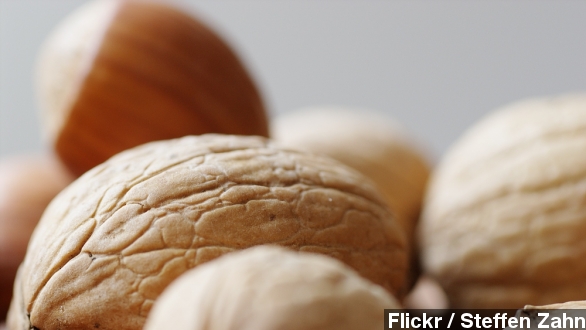 Results of a 30-year study suggest eating a handful of nuts per day might prolong life and cut the risks of heart disease and cancer.

Next time you're looking for a snack, why not throw some nuts in the mix?

A 30-year study following more than 100,000 people suggests that eating all kinds of nuts could prolong life and cut the risks of heart disease and cancer. (Via YouTube / TheWebsterLTD)

A handful a day reduced the risk of death during the study by 20 percent, heart disease by 29 percent and cancer by 11 percent. (Via BBC)

The study, published in The New England Journal of Medicine, was conducted by scientists at Harvard University and the Brigham and Women’s Hospital in Boston.

Although the scientists said more research was needed to confirm a link, they attributed the possible benefits to the average nut's healthy makeup.

"After all, nuts are nutrient-dense foods. They are rich in unsaturated fatty acids, fiber, minerals, vitamins, antioxidants and phytosterols." (Via YouTube / NEJMvideo)

And nuts can't do all the work — exercise and a healthy diet are imperative to prolonging life. As the journal's editor, Dr. Jeffrey Drazen, says, "If you think adding almonds or walnuts to a lifestyle of sloth and gluttony will help you live longer, you're probably nuts."