Corals 'Kiss' And 'Fight,' Just Like You And Me 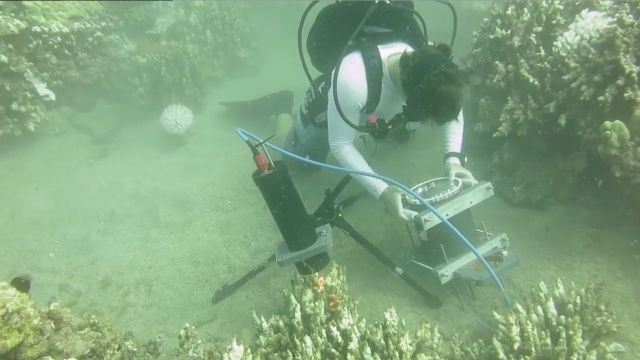 For the first time, researchers have been able to observe these coral behaviors in the ocean.

When organisms can't be studied in a lab, you have to bring the lab to them.

Researchers from the Scripps Institution of Oceanography at the University of California San Diego created an underwater microscope to study corals and their surprisingly humanlike behavior.

In one study, they observed corals "fighting." Two different species of coral positioned next to each other sent enzymes toward each other in a form of chemical warfare. Yet, when the researchers put two of the same species next to each other, no fighting occurred.

On that friendlier note, the researchers also observed coral polyps embracing each other in a mysterious phenomenon, known in the field as "kissing." The team believes it might be how the organisms exchange nutrients.

Coral polyps are the organisms that attach to rocks, and each other, to form coral reefs.

These extraordinary behaviors don't occur in the same way when coral is brought from the ocean to the lab. And to make the task of observing these behaviors even harder, they're happening on a millimeter scale.

But the study's co-lead said, "The system is capable of seeing features as small as single cells underwater."

For more on coral behavior, and how coral bleaching occurs, you can read the team's study in Nature Communications.