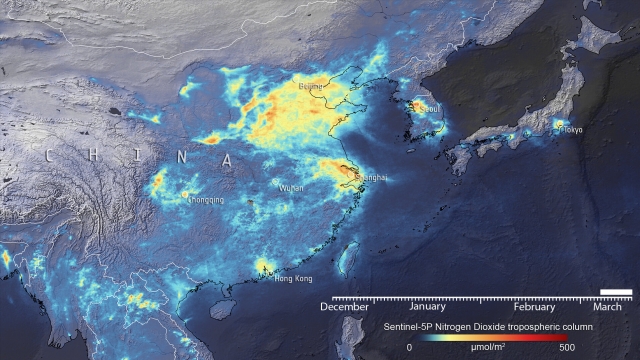 The reduced industry and travel from coronavirus lockdowns is causing at least temporary reductions in emissions across whole countries.

With whole countries locked down to reduce the spread of the coronavirus, emissions from their cities and infrastructure are fading away. In certain places, this has caused some of the longest-lasting improvements in air quality ever.

Factories have shut down and vehicle traffic has decreased around the globe during the coronavirus lockdowns. Satellites measuring nitrogen dioxide pollution from fossil fuels show emissions in those areas have dropped.

NO2 levels have decreased as activity declines in Seattle, Los Angeles and New York City. Emissions fell 10-30% below annual trends during months of lockdowns in eastern China. They've fallen 40% in two weeks over Italy and as much as 50% over India.

These regions have seen not just striking improvements in visibility in some cases, but also cleaner air — which can only help during a respiratory health crisis.

But scientists expect these improvements will be temporary. Without any changes to the energy practices that caused the emissions in the first place, they will likely rebound over time.

Until then, experts want to gather as much data as they can. Watching these short-term changes in air quality could help scientists understand more about the chemistry of pollution and the effects it has on our health.