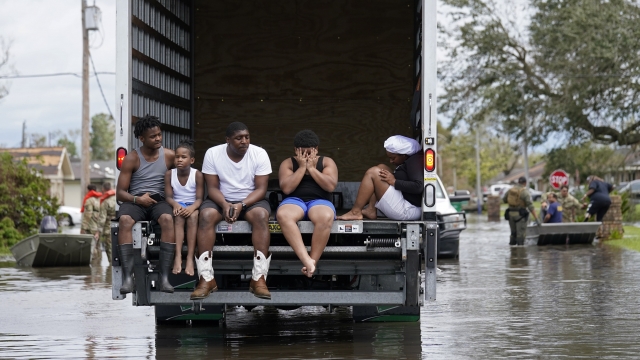 Amid hurricane season, the cost of living in the potential path can be high, and the impact of COVID and supply chain gaps are making it even worse.

Whether you stay or go, the cost of living in the potential path of a hurricane can be high. And with the impact of COVID and supply chain gaps this year, evacuations are even tougher.In southeast Louisiana, people are used to hurricane season protocols.New Orleans resident Quentin Thomas spent days stuck in the Caesars Superdome following the historic Hurricane Katrina in 2005. He says come hell or high water; he knows exactly what he'll do ahead of the next hurricane: He's getting out of town."I'm not staying," Quentin Thomas said. "It's no choice. I have little kids. You know how power outages be in New Orleans; we have to go."While hurricane season is under way there, COVID, supply chain issues and high fuel costs are a big concern for many residents who already feel stretched.New Orleans city councilman Oliver Thomas says many people will face tough decisions this hurricane season, which began June 1."Can you even afford to evacuate?" Oliver Thomas said. "Look at the price of airplane tickets, hotels where they have gone up, supplies, you know? That's been a major discussion, that if something really major happens, can people afford to leave? I don't think we were prepared for that... but we need to be."Category 1 or 2 storms usually require sheltering in place with hurricane kits handy. Those should at least include matches or a lighter, food for several days and water. But those and other suggested items to have while staying home and riding out a storm could cost more than they usually would.According to the U.S. Bureau of Labor Statistics, grocery items are up 12% nationally from this time last year."I would say definitely stock up right now because I think the supply chain disruption has caused the increase in prices right now, with very little sympathy from manufacturers and distributors," Oliver Thomas said. "I don't think they'll be that sympathetic when, when and if, a disaster hits."The Bureau also says gas is up almost a whopping 50% since last year. AAA says the average price of gas in Louisiana broke a record in June — the highest price they've recorded since they began tracking prices in 2000. Gas is around $4.55 a gallon in the state.Without a car, some will have to look into booking a rental, but the supply chain shortage might leave those people without wheels. That's because a lot of rental car companies sold off their inventory during the height of the pandemic.With air travel as a last resort, options also aren't great. The closer to the departure date, the more it could cost. Airline fares are up almost 40%, according to the Bureau.Since the spring of 2020, the CDC has recommended people include additional items to prevent COVID in their hurricane kits, like face coverings, hand sanitizer and disinfectants. They're an added cost, but Oliver Thomas says it's worth the price knowing his family is safe.