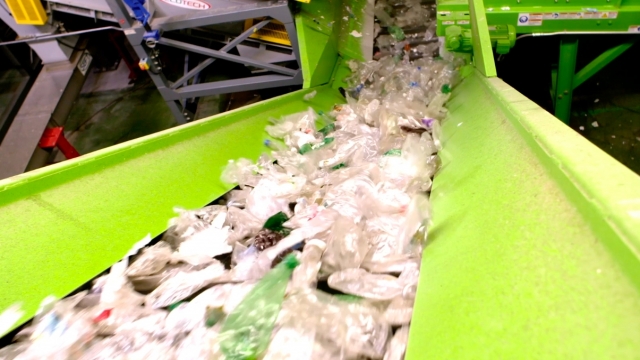 Right now, we throw away a lot of products when we're done with them. A recycling- and reuse-focused circular economy could reduce a lot of waste.

Plastic pollution, on land and in the oceans, is one of the most urgent environmental issues the world faces.

"We are overusing what the planet can provide for us on a normal cycle. We have 7 billion people today, we're gonna have 9 billion people and we're already using one and a half planets. Right. So the planet produces things and then it needs some time to renew. It needs some time to have that the regrowth. So that I can make something again and we are just we're using things quicker than it can renew," Erin Simon, Director of Sustainability R&D for World Wildlife Fund told Newsy.

Now, manufacturers — from very recognizable brands to small businesses — are looking for a more sustainable alternatives to the way that we use goods. Right now, the way the majority of us consume products, everything from clothing to appliances, is in a linear system-that’s completed with the end of life of the product. We buy something, use it, and throw it away.

"In the past 15 years, half of the plastic ever produced was made. And that's because we have proliferated our use of plastics. Not just in single use plastics which I think are always top of mind, but also in housewares, in construction, in clothing, and automotive, and obviously food service, in health care. And so as we have proliferated that use we haven't really done the best job at figuring out what to do with all of that when we're done with it," Simon said.

The alternative: a circular economy. It relies on a continuous looped system and the end of use, not the end of life. When a consumer no longer needs a product, the item goes back to a manufacturer, gets recycled, or broken down into pieces that can.

Alicia Forero is with TerraCycle, a company that specializes in hard-to-recycle things like cigarette butts and dirty diapers. She says one of the biggest drivers of recycling today is the desire to turn a profit.

"We literally sent someone to the moon, you know as a society, we can we can figure out how to take one material and turn it into something else. Your normal recycling company, they are essentially urban miners in that they're looking for material that they can profit off of collecting and aggregating and selling downstream," she said.

But some manufacturers are now paying even more attention to the environmental benefits of reusing stuff.  In 2015, the fashion industry produced more than 5 percent of global CO2 emissions. Now, the Global Fashion Agenda says 12.5% of the global market have set goals to recycle more materials. Like the small business Pingree, a shoemaker that reuses leather scraps from Detroit automakers. Or Unifi, a company out of North Carolina that recycles single-use plastic bottles into synthetic polyester (called repreve) for everything from clothing to car filters.

"We've now reached a critical point where the entire industries that are using polyester are shifting over to recycled. Because people are seeing what's happening to our oceans with plastic. So when we create this chip we put a proprietary tracer in there and then we have an outside lab.they can see what is made in the finished garment and they could put it under a microscope and they can tell that it is made with repreve," Richard Gerstein, Executive Vice President for Unifi/Repreve said.

Canada's prime minister announced a national campaign to develop alternatives to the plastic items polluting rivers, lakes and the ocean.

Household products are going circular, too. This June at Sustainable Brands in Detroit, Proctor and Gamble told Newsy the company updated its environmental goals to be more aggressive, including 50 percent less plastic in packaging by 2030.

"A month ago we launched our brand 2030 criteria. And those are criteria against which we are holding all those leadership brands accountable to enable and inspire responsible consumption. And we are making that public and we're looking both you know very regularly on our progress," Virginie Helias,  Chief Sustainability Officer for Proctor and Gamble told Newsy.

Proctor & Gamble, Unilever, and Nestle are some brands that have partnered with Loop, a sort of milk-man model where long-lasting refillable packaging goes to the user’s home, and then back to the manufacturer when its empty. Right now, it serves four states and Washington DC, and is set to be available in Toronto in 2020.

This could help address the biggest remaining hurdle: consumer behavior. One study found almost three of every four millennials said they'd be willing to spend more on sustainable products, but so far the whole world only recycles about 9 percent of plastics. Experts say designing products that will hold up to the wear and tear of a more circular economy will get consumers' attention — and so will holding companies accountable.

Environmentalists are banking on the in-vogue straw ban trend to help people realize how they can cut back on single-use plastic.