Could dogs be the key to curing childhood cancer? 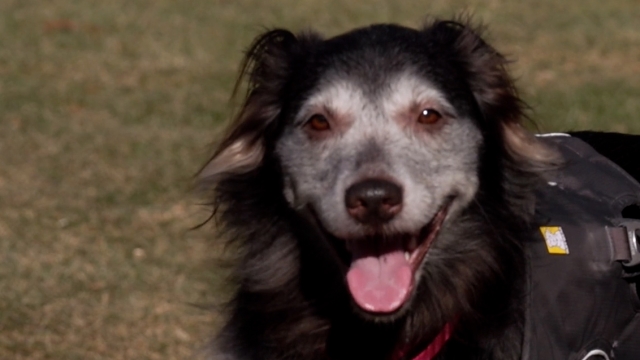 Through funding from President Joe Biden's Cancer Moonshot initiative, experts are learning how dogs are offering a unique way of looking at cancer.

Hidden behind her grey whiskers, Jellybean, a 4-year-old Golden Retriever mix from Rhode Island, could hold the key to curing some forms of childhood cancer.

But all she really cares about are treats.

"She's such a good girl," Jellybean's dad Zach Mendonca, said on a recent morning walk in their neighborhood.

The course of Jellybean's life changed dramatically back in 2020, when Mendonca and his wife found a lump on their dog's back leg.

"It started off really small, maybe smaller than a golf ball," Mendonca said.

Jellybean's doctors filled in the rest of the details. She was eventually diagnosed with osteosarcoma, a deadly cancer of the bone.

"We knew with osteosarcoma, it's not if, it's when," Mendonca added.

It turned out, though, this 4-year-old pup's journey with cancer was far from finished. Jellybean's cancer had also spread to her lungs, which made her eligible for a study at Tufts University's Cummings School of Veterinary Medicine.

How does cancer work in the body?

To continuously multiply, your cells have to divide. When they do that they copy your genes — all 3 billion letters of your genetic code.

"One of the nice things about working with dogs is they live with us," said Dr. Cheryl London, associate dean of research and graduate education and veterinary oncologist at the Cummings School of Veterinary Medicine at Tufts University.

London's team has spent the last few years exploring how different combinations of immunotherapy drugs can slow osteosarcoma, and some of the treatments are working. Jellybean is in remission, which is good news not just for dogs but for children who develop a similar type of bone cancer.

"We can say cancers we see in dogs really look identical to cancers we find in people," London said.

Dogs also offer a unique way of looking at cancer. They share many of the same immune system qualities as humans, but because their life span is more compressed, researchers can evaluate diseases in a much more rapid fashion.

"When you study cancer, something that may take two decades in people may take us five years in dogs," London added.

Funding for the project is being made possible by President Joe Biden's Cancer Moonshot initiative. The goal is not just to improve cancer treatment for dogs, but for people as well.

"There has been little in the way of funding for these canine studies. It's only through Moonshot we've been able to do this," London said.

As for Jellybean, her mom and dad thought they'd have just a few extra months with their dog. It's now been almost three years.