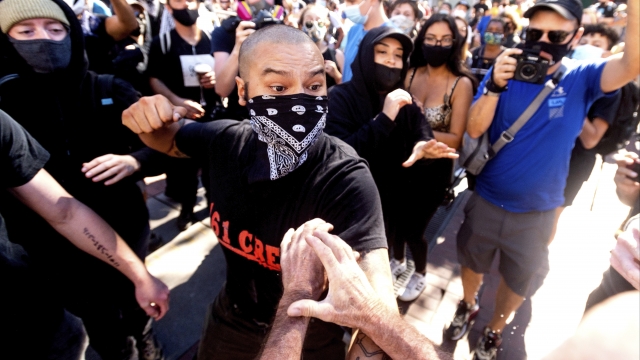 In San Francisco, one supporter of President Trump was taken away in an ambulance while another was punched in the mouth.

A conservative free speech rally in San Francisco was broken up Saturday by counter-protesters who overpowered and attacked the demonstrators.

An organizer of the event was also punched in the face. Philip Anderson said he was struck "for no reason," posting a picture of his bloody mouth online.

Six people were reportedly injured including one supporter of President Trump who was taken away in an ambulance. Counterprotesters threw eggs, beverages and glass bottles, with one telling KNTV, “We don’t need a new fascist movement in this country.”

While many in the rally wore clothing indicating support for President Trump and Blue Lives Matter, the rally was hosted by Team Save America to protest Twitter. They accuse the social media site of stifling conservative voices. The event was eventually cancelled.