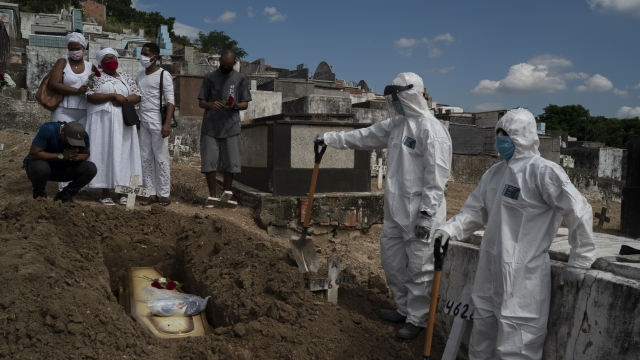 Amid political feuds over Brazil's coronavirus toll, the Supreme Court rules the government must continue providing cumulative data to the public.

This was the scene on Rio de Janeiro's famed Copacabana Beach this week. An activist group dug mock graves and erected crosses to condemn government indifference as worsening the coronavirus pandemic.

What happened next symbolized the tensions over acknowledging the continuing virus surge in a country with more than 800,000 cases and 40,000 deaths — the world's second-worst toll.

This man began toppling the crosses, angrily accusing "leftists" of spreading fear. This man, who lost his son to COVID-19, furiously replaced them.

That very feud is playing out in Brazil's pandemic politics. Last week, the government of right-wing leader Jair Bolsonaro abruptly announced that it would no longer release cumulative death and infection totals.

On Tuesday, Brazil's Supreme Court ordered the health ministry to resume publishing the data. One justice, Gilmar Mendes, later let loose on Twitter. He said "manipulating statistics ... will not absolve the government for its responsibility from an eventual genocide."

Bolsonaro dismissed the uproar, saying Brazil was merely trying to improve statistical gathering for the virus. He has also notably accused the media of fanning fears over "a measly little cold."

Brazil was seeing more than 30,000 new daily cases of the virus this week, its highest average to date.

An epidemiologist at the University of São Paulo warns that things are about to get worse — with hospitals filling up with new COVID-19 patients. But Bolsonaro says more people will die of hunger and despair if Brazil fails to reopen.