COVID-19 Asylum Limits At U.S.-Mexico Border To End May 23 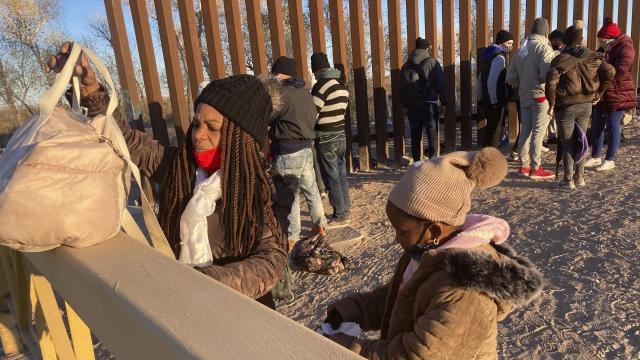 The policy will end on paper April 1, but it will not take effect until May 23, to allow border officials time to prepare.

At the U.S.-Mexico border, huge change is in the air.

The Biden administration is planning to phase out a pandemic-related asylum restriction, a move that could dramatically increase what is already historic levels of migration to the U.S.

"There will be an influx of people to the border. And so, we are doing a lot of work to plan for that contingency," said White House Communications Director Kate Bedingfield.

But with vaccinations deployed and the country transitioning to living with the virus, skeptics say the rule is no longer justified by science. For many, it never was.

"There were no grounds to suggest that immigrants arriving at the southern border represented any threat whatsoever in terms of COVID 19," said Oscar Chacón, the Executive Director at Alianza Americas, a Chicago-based advocacy group for Latino immigrants.

Under the policy, U.S. border agents have carried out 1.7 million expulsions — often dropping migrants right back on the Mexican side of the border.

Advocates say that puts them in harm's way by forcing them to wait in cartel-infested towns, far away from home.

"This year, I've interviewed hundreds and hundreds of families. All of them have been kidnapped, raped, attacked at gun point. At least once, if not two or three times. It's insane," said Human Rights Lawyer Jennifer Harbury.

The Biden administration is ending the controversial policy in late May. The White House says it's bracing for as many as 18,000 migrant arrivals a day in the ensuing weeks.

"The core of their plan is to surge resources to the border, whether that's staffing, whether that's the ability to stand up temporary shelters," said Jessica Bolter, an Associate Policy Analyst at the Migration Policy Institute.

The goal is to avoid a repeat of border humanitarian crises that occurred in the past year, like the surge of unaccompanied migrant children in government shelters or the influx of Haitian migrants in a small Texas border town.

"It's not clear, though, that even this level of preparation will be sufficient," said Bolter.

The expected influx could bring serious political headaches for democrats ahead of the midterm elections in November.

Republican Senator John Cornyn of Texas is urging the white house to extend Title 42 to keep our border secure and COVID at bay.

"We're still wearing masks on buses and airplanes and buses and public transportation, but people are continuing to pour across our border and put the rest of this country at risk," said Sen. Cornyn.

The administration has been under immense pressure from its own base and from ongoing litigation to stop using the public health emergency order.

But for Brandon Judd, the head of the Border Patrol Union, May is too soon.

Once the policy is lifted, border agents will go back to processing migrants under traditional protocols.

Officials say that means two scenarios: Swiftly deporting those who don't make an asylum claim and allowing others to pursue their case either from detention or from inside the U.S. — most likely with a monitoring device.