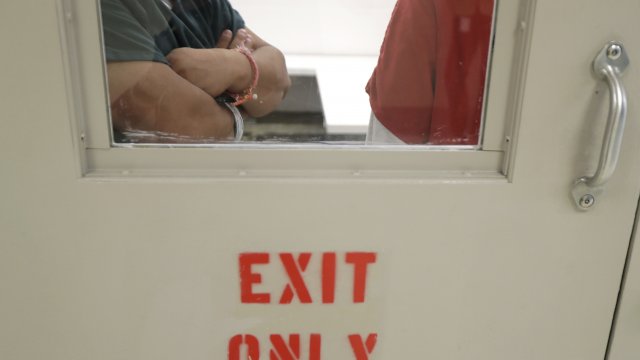 Detainees and some guards say gloves, masks, soap and disinfectant are in short supply in facilities run by contractors.

More than 3,000 detainees nationwide have tested positive for the virus in 70 facilities, according to ICE data. At least two of them have died from COVID-19.

"My brother died because ICE didn’t release him. We suffer, the family suffers," said Rosa Escobar, sister of Carlos Escobar-Mejia, the first ICE detainee to die from the virus in May.

ICE says it has released over 900 vulnerable immigrants in the past months as health experts have raised concerns about how easily the virus can spread in detention centers. Another 500 at-risk detainees have been released by federal judges' orders. Still, more than 20,000 remain in ICE custody — nearly half of them without criminal convictions.

"I'm afraid of dying in here. We're 30 people in one room. One small room. They don't give us soap, just a little bit of shampoo. And if you want more you have to buy it," said Daniel, an asylum-seeker who's detained at the Joe Corley Detention Facility in Texas.

The vast majority of immigrants in ICE custody are held in facilities operated by private prison contractors. On Monday, the CEOs of four of these companies testified to Congress about actions they are taking to minimize the spread of COVID-19.

"COVID-19 specific cleaning supplies and hygiene products have been continuously available in all housing units," said George Zoley, chairman and CEO of the GEO Group.

"Our staff are required to wear masks, and we provide masks to both our staff and detainees in our ICE facilities," said Damon Hininger, president and CEO of CoreCivic.

Detainees and some guards have said, gloves, masks, soap and disinfectant are in short supply in some private facilities for both the staff and immigrants. Nearly 1,000 employees at private detention centers have contracted the virus and five have died.

"Guidance to facility personnel must be clear and explicit. Transfers between facilities must be stopped immediately, and adequate medical care must be provided," said U.S. Rep. Kathleen Rice.

A federal judge recently ruled that children must be released from ICE detention by Friday because the centers "are 'on fire' and there is no more time for half measures."

ICE currently detains roughly 260 family members at three facilities in Texas and Pennsylvania. Two of those facilities are operated by private contractors. The government said in court that it might separate the families and release the kids without their parents.