COVID-19 Patients Still Face A Long Recovery After The ICU 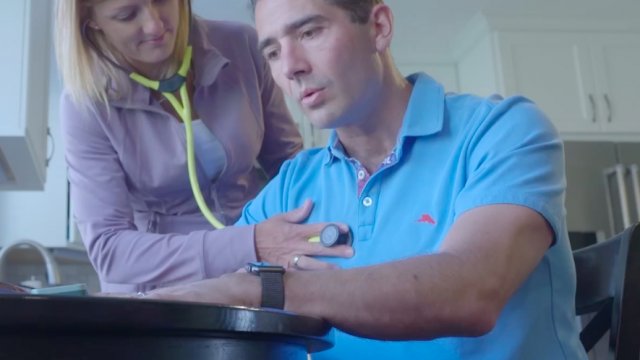 After 14 days on a ventilator and 11 days on ECMO, Jason Jahanian's COVID-19 recovery is just getting started.

A heartwarming scene is playing out all across America — a celebration of survival amid so much sadness. Jason Jahanian left the hospital April 21 after COVID-19 put him in the intensive care unit and on a ventilator for two long weeks. It was a long road home, and he has miles to go still before he’s well again.

"Zero muscles, zero strength. And right now, today was the first day where I was able to walk a mile straight. My oxygen level is good, my capacity is good, but my energy, ... my endurance is shot," he told Newsy.

Jahanian is 39 and was in great shape before COVID-19 laid him low. Those 14 days on a ventilator and almost two weeks on an ECMO machine that effectively oxygenated his blood outside his body so his failing lungs could rest took a serious toll.

He says: "The first time I sat up, just the weight of my own shoulders and head. I couldn't hold myself up. If I had a plate of food and there was a sliced apple, my hand was was like this. And then I had trouble even getting it to my mouth."

His mouth has sores from being on the vent. He’s trying to gain back the 25 pounds he lost. His wife set up a bedroom downstairs. For this former marathon runner, just walking up the stairs is too intense of a workout. And he’s what experts call lucky. Two-thirds of ICU survivors face a new impairment that impacts daily life.

"Going to sleep initially after I got home, the first couple of nights there, my mind was racing. I'd be in some sort of hesitation going to sleep. Am I going to wake up? Fully knowing, logically, that I was on the mend and all that, but losing those two weeks, it's very hard for me to explain what sort of mental state that puts you in," he explains.

Then there’s the long-term mental recovery. About one in four ICU survivors suffer from PTSD, one in three from depression. Dr. James Jackson at Vanderbilt expects the rates to be higher among COVID-19 ICU survivors.

"The trauma of being critically ill, and it includes being on a ventilator. But it's not only that. ... It's fear of dying. It's pain. It's the dynamic of being restrained," Jackson told Newsy. "We fear that those things will be probably considerably worse than they otherwise would have been because of the absence of social support."

All of this has an impact on patients' quality of life and return to work. Dr. Dale Needham runs the Critical Care Rehabilitation Program at Johns Hopkins University. His research found less than half of ICU survivors will be back to work in one year. Up to one-third of survivors won’t return to work over five years.

As for Jahanian, he’s taking the small recovery wins day by day. He knows his path forward is going to be hard, but not impossible. He hopes others recovering realize that, too.