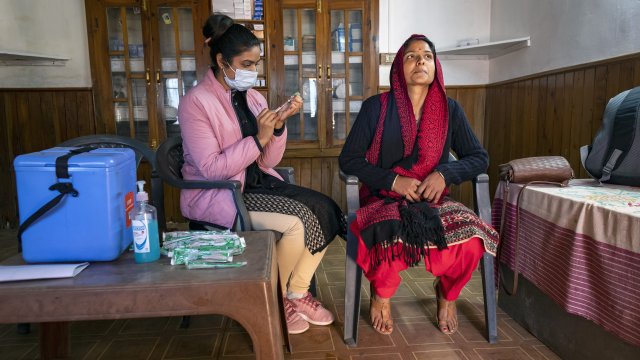 This time last year, a woman in the United Kingdom became the first person in the world to receive a COVID-19 vaccine.

Other countries were quick to follow suit. The U.S. administered its first COVID vaccines on Dec. 14.

One year into the rollout, "Our World In Data" shows more than 8 billion vaccine doses have been given out. At this point, 55% of the world's population has received at least one dose of a COVID-19 vaccine.

While there are still those who need to get their first dose, others are already getting boosted. On Wednesday, Pfizer said early lab tests showed that their COVID vaccine plus the booster offers significant protection against Omicron.

But getting to this point hasn't been easy. There's been the wait for approvals, countries have struggled to get doses, and misinformation about vaccines has spread like wildfire.

In the last year, the U.S. has gone from mass vaccination sites for staggered groups, to vaccines for children as young as 5 and booster shots for all adults.

The country has a vaccine from Johnson and Johnson that uses a viral vector, plus one from Moderna and one from Pfizer that use MRNA. While the MRNA vaccines were the first of their kind, the science was studied before for other diseases like the flu, Zika and rabies.

In June 2021, the threat of the Delta variant arose, which, combined with the fact that immunity from the vaccines waned over time, brought boosters into the picture.

"I don't like to think in terms of miracles ... I think of this is as our country, our pharmaceutical industry, our policymakers, our government workers worked really, really hard at making this so-called miracle," Howard Foreman, Professor of Public Health at Yale University, said. "This is not the result of accident. This is a result of a lot of people putting their best efforts towards something that is very difficult, and frankly, they've made a lot of mistakes along the way. I'm not saying that we've been perfect, but my God, when you think about what the odds were a year and a half ago and where we are right now, we've made a lot of progress, and we still have a lot of work to do."

The Omicron variant and winter Delta variant surge are showing the need for vaccinations worldwide. Studies show the more people who are vaccinated, the less chance the coronavirus has to mutate, and it's those mutations that lead to variants of concern.

Meanwhile in Europe, a resurgence of the virus continues to show little sign of slowing down.

Though many thought restrictions were a thing of the past, it seems lockdowns, COVID-19 passports and travel bans are sticking.

Lawmakers are pleading with Europeans to have patience as vaccines continue to roll out and scientists work on researching ways to fight this virus. They also say that cooperation and cohesion is key, not just within Europe, but also internationally, pointing to many examples of how Europe and America have worked together to fight the pandemic.

In South Africa, the Omicron variant is driving a fourth wave of COVID-19 infections, causing its government to further encourage citizens to get vaccinated.

Vaccine supply was initially a concern and a problem on the continent, but today only 56% of supplied vaccines have been administered, partly due to vaccine hesitancy.

Now governments and businesses are considering vaccine mandates to encourage the population more than twice the size of North America's to get vaccinated.

India has been one of the countries hardest hit by the COVID-19 pandemic. It's second only to the United States in terms of the official total number of infections to date.

A deadly second wave of infections earlier this year brought the country's health care system to its knees, and despite the country being the world's largest manufacturer of vaccines, it's still nowhere near hitting its original target of vaccinating the entire adult population by the end of this year.

So far, about half of all adults have been fully inoculated against the virus, and most have received at least one dose. The vaccine still isn't available to children there yet.

Logistical challenges are making it hard to vaccinate citizens in the country of some 1.4 billion. Most people live in rural areas, and it's also seeing shortages of doses and hesitancy.

But the vaccination drive has been picking up, and doctors say that concerns about the Omicron variant are prompting more people to go and get vaccinated. There's also a push from the Indian Medical Association for booster doses to be made available to doctors and nurses and those who are most vulnerable to COVID-19. This comes amid fears that the Omicron variant could trigger a third wave of infections in India.