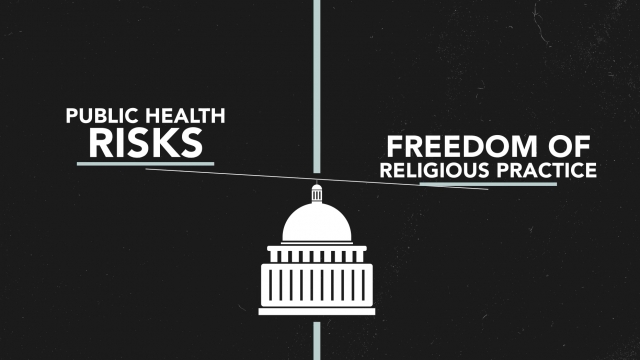 State and local governments across the country are walking a cultural and legal divide, weighing public health and freedom of religious practice.

Over 95% of Americans live in a state that has directed them to stay at home except for the absolute necessities.

Some necessities are universal: groceries, drug stores, taking care of loved ones. But there’s one thing millions of Americans consider a necessity that has become the subject of heated debate — especially at this time of year.

Houses of worship everywhere have closed their doors. Still trying to support their communities, many have turned to curbside or remote services. That means observing Easter, Ramadan and Passover in ways they never have before. But a few continue holding services in-person.

This is Solid Rock Church outside Cincinnati, Ohio.

The governor here banned gatherings of any size in the state, with this exception: In Ohio, there is no limit on the number of people that can meet for religious worship.

"It's legally permissible for the governor of Ohio to make that distinction. I think it's a terrible policy distinction and can lead to some pretty risky and perhaps horrifying health outcomes," said John Inazu, a professor of law and religion at Washington University in St. Louis.

The First Amendment protects the free exercise of religion. But like any right in our constitution, that right is not unlimited. So the state can always come up with reasons to limit any kind of rights if its interest is high enough."

I won't be able to meet for Easter services. And that is that's deeply sad. But it's also where we are right now."

Some COVID-19 deaths have been directly traced to the spread of the disease during religious gatherings.

That means that state and local governments are walking a cultural and legal divide — weighing public health against freedom of religious practice.

As of April 10, at least 14 states still allow religious gatherings of any size. A couple of these states have given minimal guidance on containing COVID-19. But other states have made exceptions: banning or limiting large gatherings except for religious worship.

Still, most states have placed limits on gatherings, including religious ones. These states face the tricky issue of enforcement.

"The people who get to decide which laws are enforced are the ones who are policing the streets," Inazu said.

In some states, religious groups have decided to gather in defiance of the law.  After weeks of holding services, A Louisiana pastor was finally arrested.

"The National Football League stadiums are closed, the barrooms and nightclubs are closed, but the church is still open," said Pastor Tony Spell of the Life Tabernacle Church near Baton Rouge, Louisiana.

And after several police calls to large funerals in New York, the NYPD said it would start issuing $1,000 fines to violators.

Others have seen their governors begging these groups to stop what they’re doing.

And while Inazu says that states can certainly ban religious gatherings, defining what is "essential" raises questions.

"If you start having states and localities saying Home Depot can stay open and the coffee shop can stay open, then suddenly a key question here then becomes, well, what's an essential business?" he said.

“Our stupid governor says you can’t get together with your family for Easter. Well, they’re going to stand at my front door and see how my people go,” said Pastor Jack Roberts of Maryville Baptist Church in Louisville, Kentucky.

And sometimes it’s not only religious leaders who don’t agree with their government — it's the government itself that doesn’t agree.

In Kansas, the governor banned religious gatherings, but the state legislature overruled her.

Many religious groups aren’t getting caught up in the debate. They’re just finding ways to do the critical work that needs to be done right now in their communities.

"I think most religious leaders I'm talking to are, more than ever, trying to figure out how to get food to the hungry and shelter to the homeless and those sorts of things, which are core to what a lot of religious people care about in practice," Inazu said.