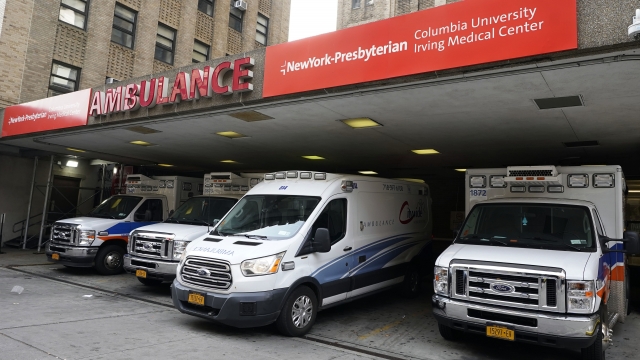 Thousands of New York City emergency medical service workers are out sick due to COVID-19.

Omicron is shaking the Big Apple.

Thousands of emergency medical service workers are out sick due to COVID-19.

"We are not in a good place," Gov. Kathy Hochul said. "I'm going to be really honest with you. This is the winter surge we predicted."

The New York City Fire Department has taken to social media to remind residents that if they're not severely ill, to allow first responders to assist those most in need. They ask that people only call 911 during a real emergency.

Eighteen percent of firefighters are out sick due to COVID. That's nearly 2,000 of the city's 11,000 uniformed firefighters.

New York City's new mayor, Eric Adams, has cautioned residents against making this what he calls a "massive hysteria event," saying New Yorkers need to learn how to live with COVID. Regardless of spiking cases, the city will remain open.

"We have to open up. You know, I know what we're going through and I know how hard it is," Adams said. "If we don't open our city — we have almost a million people who are behind in their rents right now that here in this city. We have low-skilled employees who can't do remote employment from home or telecommuting. That's not a reality in a city like New York and across America. I need my city to open."

Omicron is not only shaking the Big Apple to its core, but the entire nation. In San Diego, more than 100 firefighters are in isolation due to the coronavirus.

"That has now affected the staffing of fire engines around the city, where we're having to temporarily brown-out units. And that is not the road we want to go down," San Diego firefighters union president Jesse Conner said.

He said they've had to resort to overtime assignments.

In Maryland, fire departments and EMS services are pushed to the brink with COVID, and hospitals are overwhelmed with patients.

Bill Rehkopf with Sykesville Freedom District Fire Department said: "See if you can contact your primary care physician. If not, go to an urgent care, but you want to use 911 as a last resort. We just have an overwhelming number of people wanting to be seen in emergency rooms, and maybe who shouldn't be, maybe who don't need to be seen."

In Detroit, families are unable to reach 911 for help.

Charles Johnson's dad had an emergency.

Johnson called 911 in Detroit to get help for his father, but he got an unexpected response — that they were full.

While desperately waiting for an ambulance, he then called again and again. Forty-nine minutes after Johnson called for help, an ambulance arrived to his home.