Falsely Accused Of Spying, These Americans Still Deal With The Impacts 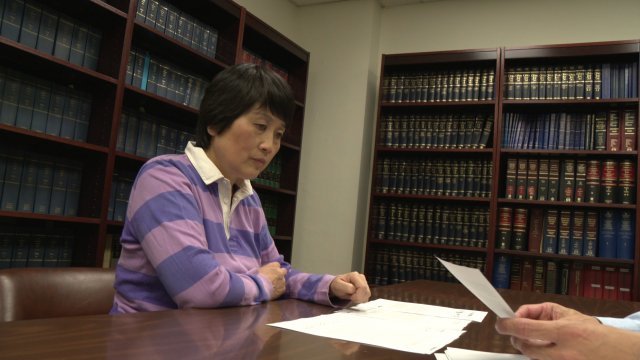 A recent study says, "As many as 1 in 5 Asian people prosecuted as spies may be innocent, a rate twice as large as for other races."

FBI Director Christopher Wray says one of the biggest threats to the U.S. is an increase of Chinese spies with Chinese companies and the Chinese government aggressively targeting American companies. As the Department of Justice attempts to crack down on Chinese foreign spying, some Chinese Americans have been caught in the department's dragnet. Sherry Chen is one of them.

"My life is turned upside down not once but twice, so I already, you know, lost everything in 2014," Chen says.

Chen is an award-winning, Chinese-born American hydrologist for the National Weather Service. She was accused of sharing secret information about the nation's dams with Chinese officials in 2014. Criminal charges were eventually dropped against Chen, but she lost her job in the process. Chen's civil lawyer says race played a big part in her arrest.

"You unfortunately have a situation right now where federal law enforcement gets a Chinese American, particularly a Chinese American scientist, in their crosshairs, and they just don't let go, and they're blinded by that bias," says Steve Simon, Chen's lawyer. "And they're not looking at the details of the case. And innocent people are being hurt."

And Chen isn't alone. In 2015, Chinese-born American professor and physicist Xi Xiaoxing was also led away in handcuffs after he was accused of sharing secret American technology with China — blueprints for a pocket heater. But months after his arrest, the blueprint evidence the Justice Department accused Xi of sharing wasn't for a pocket heater at all.

"And why does it still matter anymore now that the case has been dropped? Because what the government did to me represents a great danger to liberty in this country. Because I don't want this to happen to you. If we don't speak up against the practice of racial profiling, what happened to me could happen to anybody," Xi says.

There are growing concerns over a pattern of espionage charges being unfairly directed at Chinese Americans. A recent study found the "percentage of people of Chinese heritage charged under the Economic Espionage Act (EEA) has tripled since 2009." And 1 in 5 Asian people prosecuted as spies were never convicted of espionage.

Chen's and Xi's cases have been widely covered by the media. Yet, despite being cleared of charges, they've yet to receive apologies from the DOJ. We contacted the DOJ, which emailed back and said it has no comment. Xi's daughter says that response has lingering effects.

China Offers To Buy Nearly $70 Billion In US Goods

The offer was made during negotiations over the weekend.

"The U.S. government, who accused my father and prosecuted him, has not apologized, explained or been accountable in any way for this abuse of power that they have created. And my family has still been dealing with the consequences of this action," Joyce Xi says.

The Congressional Asian Pacific American Caucus has recently demanded an independent investigation into the mishandling of Chen's case. Despite being cleared of spying, her employers at the Department of Commerce are appealing.

"It's hard to imagine being out of work for so long — for two years," her lawyer says. "She had been out of work unpaid when she was suspended while the criminal charges were pending. And more than that, this is a job she loves. She's a scientist; specifically, she's a hydrologist. She absolutely loved the work she did. And she's been kept away from it for almost four years."