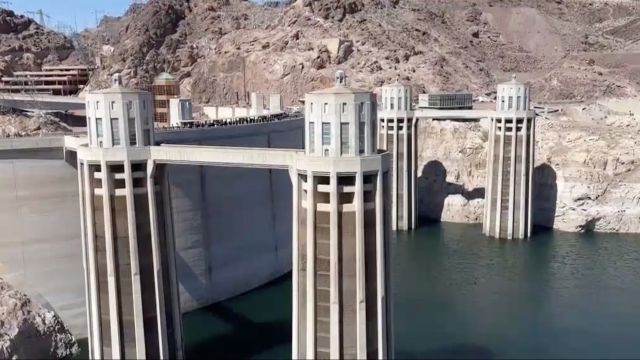 Water and power supplies for tens of millions of American are being threatened as Lake Powell and Lake Mead water levels continue to drop.

America's two largest reservoirs are in trouble. The Colorado River feeds Lake Powell and Lake Mead and both are at near-record lows, which is threatening the water and power supply for tens of millions of Americans.

"Between 2 and 4 million acre-feet of additional conservation is needed just to protect critical levels in 2023," Bureau of Reclamation Commissioner Camille Touton said.

The two-decade-long mega-drought is drying out the west.

"Less of the precipitation that feeds the river actually makes it into the river," water policy researcher Jeff Lukas said.

You don't have to tell Robert Gripentog. His family has owned the Las Vegas Boat Harbor since the 1950s.

"It costs us a lot of money because we have to chase the water down," he said. "We have to move the marina."

He's stayed open as the water levels have dropped more than 40 feet in just the last two years and he's lost about 40% of his business.

Critical water supplies to the American southwest are drying up.

"We need to come up considerably from where we're at right now," Gripentog continued.

In July, Lake Mead hit its lowest level since it was created — just 1,040 feet.

There was some short-term good news this summer, though. A strong monsoon season in the southwest pushed the depth up four feet. However, that doesn't come close to solving the problem.

As the water keeps dropping year after year, there's less drinking and irrigation water for 40 million people across the region. And there's concerns about the two dams' production of hydro-electric power.

When the water drops below 950 feet, the massive Hoover Dam can't generate any more power. But it doesnt' have to get that low to cause problems. Its power output is already down 36% due to the current water level and there's a chance it could drop too low to make power in the next three years.

The Glen Canyon Dam on Lake Powell is facing the same problem. The Bureau of Reclamation expects it to be just 32 feet above the minimum pool power level by January 1. There's a 10% chance it could drop below the cut-off level by next year and a 30% change by 2024.

The Hoover Dam powers the lives of more than 1.3 million people and more than half the power goes to Southern California.

Why Is The U.S. West Experiencing A Megadrought?

Climate change is affecting the U.S. especially strongly in the west. Rivers and reservoirs are experiencing dangerously low levels.

Jim McCarthy is the president of the Electric Vehicle Association of Southern California.

"We need to realize we're going to have less hydro power, at least in the near term," he said.

The state is home to almost half of all electric cars in the country.

"If we lose a lot of hydro power, it will be a problem," McCarthy continued. "We need to upgrade now. But if you drive an EV, at least you can power on your own."

The group responsible for grid integrity says the western grid is at risk of an energy emergency because of falling hydro-power levels.

Last fall, the drought dried up Lake Orville in Northern California, forcing that hydro plant to shut-down for the first time since the 1960s.

Hydro power is the "black-start" power used to jump-start the country's power grid after blackouts.

The Department of Energy says hydro is critical to grid reliability because it consistently flows, except when it doesn't.