Should Netflix Originals Be Up For Major Film Awards? Many Disagree 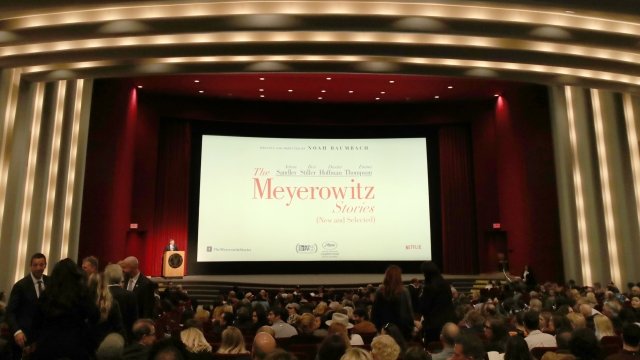 The head of the Cannes Film Festival said last Friday that original films from streaming companies like Netflix aren't eligible for competition. That's because the festival now requires theatrical releases in France — something Netflix has had trouble organizing.

Last year, Netflix originals "Okja" and "The Meyerowitz Stories" were up for competition at Cannes. But because Netflix wouldn't agree to release the films before their online debuts, the films went without theatrical releases. That decision garnered major worldwide criticism, and audiences at Cannes' "Okja" screening reportedly booed at the Netflix title card.

At the heart of this issue is the distinction between a theatrically released film and a film made-for-television — or in this case, made-for-streaming. The head of Cannes says original work from Netflix and Amazon are "hybrids" separate from cinema, and other industry leaders back this idea.

"Once you commit to a television format, you're a TV movie," director Steven Spielberg told ITV News. "You certainly, if it's a good show, deserve an Emmy, but not an Oscar. I don't believe films that are just given token qualifications in a couple of theaters for less than a week should qualify for the Academy Award nomination."

Other directors disagree. Surrounding the controversy of his film "Okja," director Bong Joon-Ho told Variety: "All films are eventually archived in DVDs, Blu-rays and in other digital media after screening in theaters for a while. ... I don't think making a film backed by Netflix makes much difference for me as a filmmaker."

The Academy of Motion Picture Arts and Sciences currently stipulates that eligible films must be "publicly exhibited ... for paid admission in a commercial motion picture theater in Los Angeles County." Films need to run at least three times a day for at least seven consecutive days.

This isn't to say that original films from streaming companies can't get nominated or win major industry awards. In fact, some already have.