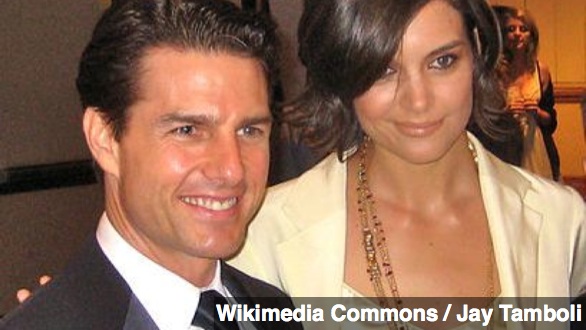 In newly released court documents, Tom Cruise admitted Scientology was one of several factors behind his 2012 divorce from Katie Holmes.

Newly released court documents obtained by Radar Online reveal a rare admission from Tom Cruise. The 51-year-old actor openly acknowledges Scientology was one of several factors behind his split with Katie Holmes.

The revelation comes more than a year after the couple divorced. Cruise's statements were part of a court deposition for a lawsuit he filed against Bauer Publishing. (Via People)

Cruise is suing the group for $50 million because of two stories in which writers claimed he abandoned his 7-year-old daughter, Suri, following his divorce from Holmes. (Via Gossip Cop)

When a lawyer asked Cruise if Holmes left him to protect Suri from Scientology, Cruise replied that he found the question offensive. Then he admitted it was one of several reasons Holmes left. (Via The Telegraph)

In the deposition, Cruise also said Suri is not currently practicing Scientology. According to former church members, that would be a devastating move because Scientologists label defectors as "suppressive people." (Via Access Hollywood)

Defectors claim the church wants practicing members to cut off all ties with people labeled "suppressive."

Lawyers also asked Cruise whether he would label Holmes a suppressive person for leaving the church. He responded by saying he didn't want to oversimplify the religious doctrine. (Via "The Ellen Degeneres Show")

The documents reveal Cruise said his two children with actress Nicole Kidman hadn't had any contact with Holmes or Suri since Cruise and Holmes divorced in June of 2012.

Cruise defended himself when lawyers hinted he hadn't been around to raise Suri. Cruise admitted there was a 110-day period when he hadn't seen her. (Via YouTube / ParksWaltDisney)

Cruise blamed the time gap on his shooting schedule in London for the film "Edge of Tomorrow." (Via io9)

When he was asked why he missed Suri's first day of school but was able to make it back to the U.S. for a Scientology event, Cruise answered that it was partly due to coordinating a visitation schedule with Holmes.