Cruz And Kasich Are Joining Forces To Try To Defeat Trump 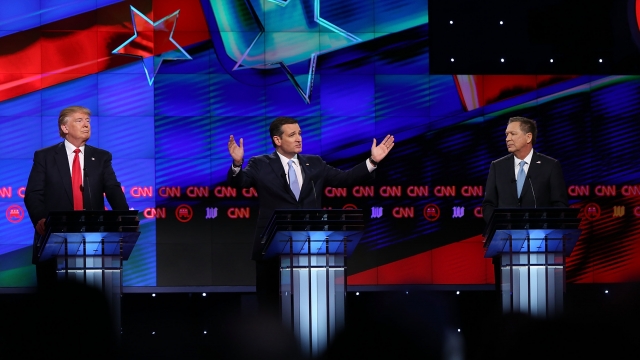 Ted Cruz will focus on Indiana while John Kasich turns his attention to New Mexico and Oregon.

There are three Republican Party candidates still running for president, but now two are working together against the third.

The statement from Kasich's chief strategist John Weaver says, "We are very comfortable with our delegate position in Indiana already, and given the current dynamics of the primary there, we will shift our campaign's resources West and give the Cruz campaign a clear path in Indiana."

Cruz's campaign manager Jeff Roe sounded eerily similar in his statement, which says, "Our campaign will focus its time and resources in Indiana and in turn clear the path for Gov. Kasich to compete in Oregon and New Mexico, and we would hope that allies of both campaigns would follow our lead."

There are 57 GOP delegates available in Indiana, which is a winner-take-most state, according to the New York Times. Voters go to the polls in Indiana on May 3.

Oregon voters will head to the polls May 17 to determine who gets their state's 28 delegates. New Mexico has 24 delegates, and its primary is June 7.

The campaigns are taking a divide-and-conquer approach only for those three states, and both statements stress the typical campaign atmosphere will continue for the remaining caucuses and primaries.