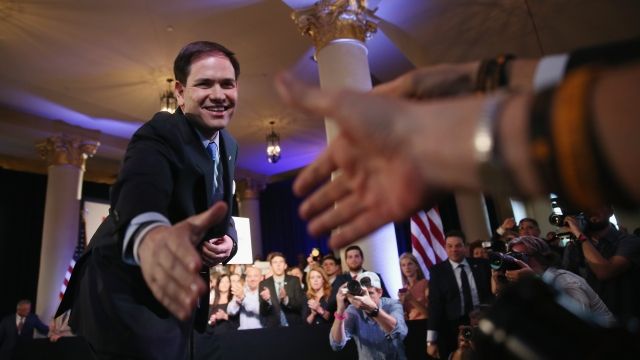 The number of Cubans migrating to the U.S. has increased since the announcement of the normalization of relations.

After months of traveling, a group of about 8,000 Cubans is beginning to arrive in the U.S. They are asylum seekers, and they’ve been stuck in Central America because of international migration laws.

They’re trying to get to the U.S. to take advantage of a law from the 1960s while they still can, and Marco Rubio says the influx of migrants is "becoming a real crisis."

In 1966, the Cuban Adjustment Act made it especially easy for Cuban immigrants to move to the U.S. It was a Cold War attempt to subvert the communist nation and offer refuge to the politically persecuted. (Video via U.S. Department of State)

And the law still stands. Cubans only need to show up at a U.S. entry point and pass a criminal and immigration check. After a year in the U.S., they can apply for legal permanent residence. They can also immediately get Medicaid, welfare and food stamps. (Video via The U.S. National Archives and Records Administration)

That’s a perk Rubio takes issue with. This month, he proposed a bill in the Senate to stop Cuban immigrants from automatically receiving those federal benefits. He wants them to show they were persecuted in Cuba, which is the same process other refugees and asylum-seekers go through. (Video via C-SPAN)

And the newly revived relationship between the U.S. and Cuba has some questioning the future of the entire program. Countries with normal relationships don’t usually offer each other’s citizens a free pass into their countries.

The U.S. saw a huge spike in immigration from Cuba after the announcement. In fiscal year 2015, more than 43,000 Cubans entered the U.S. That’s almost twice as many than the year before.

And those numbers haven’t shown a sign of falling. Rubio, himself a Cuban-American, says some of these Cuban immigrants are abusing American generosity.