Curbing People With Mental Illness Away From Jail 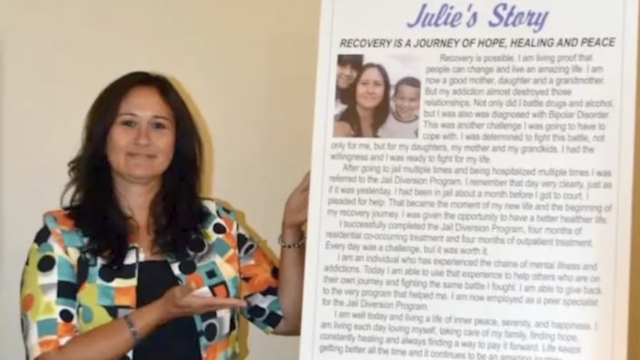 "We're not gonna let you down. Keep it up, keep taking it one day at a time," said Judge Javier Enriquez.

Julie Reed is a program graduate, and now a peer specialist for the program.

"I'm helping people and I'm giving back to the community," said Reed.

When she was a teen she tried to take her life and was introduced to the mental health system. Years later she became a widow and she believes untreated trauma fed her mental health issues. She says  she eventually started self medicating.

"I've had many different diagnoses. I would probably lean more towards like bipolar disorder. It was just really hard to access help and I was uninsured," she said. "I was a single mom and trying to work full time trying to juggle my two kids and it just was a lot and I just started breaking down. I wound up going through the criminal justice system and fortunately that's where I got my help."

Newsy exposes the important nuance in America's mental health crisis, with a focus on how people are overcoming their struggles.

She was ready for change and said the program provided support and links to services.

NEWSY'S HALEY BULL: When you look at this photo here, your story being displayed, what goes through your head?

JULIE REED: I've come a long way and I'm just glad I had the support of my family. If you see in my story "Julie's Story" it's a lot of my family because they were the ones that were really there for me and helped me get through. I wouldn't be able to do it without them. And the team here at JDP helped out a lot. I feel good and hopeful of my future. It's been 12 years in recovery clean and sober, no going back to jail, no going back to the hospitals.

The program goes back more than two decades.

Judge Steve Leifman has helped turn Miami-Dade County into a national leader in criminal justice reform by changing the way people with serious mental illnesses are treated in the criminal justice system.

"We wouldn't treat people with cancer or heart diseases this way; we shouldn't be treating with mental health illness this way," said Leifman.

He is a former assistant public defender who became a passionate advocate as a judge. In his courtroom he saw the holes in the system that led to a commitment for change.

"Our recidivism rate in our felony and misdemeanor went from about 75% now to about 20 to 25%," he said.

But there are still more he hopes to reach. The Miami Center for Mental Health and Recovery plans to become an extension of the program later this year, a one-stop shop for the mentally ill cycling through the system.

BULL: Is this a first of its kind facility in the country?

STEVE LEIFMAN: It's the first of its kind in the United States and possibly in the world.

It will include everything from a crisis stabilization unit, residential treatment, courtroom to health care, tattoo removal and a culinary support employment program.

The details, down to the lack of linoleum, are carefully designed to be more welcoming.

"It will give us a full continuum of all the services we already have that were lacking and every other community lacks. And that's the problem. There's no capacity in the United States for the most acutely ill," said Leifman.

The American Psychiatric Association Foundation partnered with others on the "Stepping Up Initiative" to help support counties in reducing mental illness in the justice system. Rawle Andrews Jr. is the executive director of the APA Foundation.

"Over two million people a year get caught up in our criminal justice system annually and those two million people suffer from serious mental illness that need help but what we've given them is a jail cell," said Andrews. "What we're hoping and what we're backing is that this 988 system that just went into place last month almost 30 days in, that the diversion and deflection that we need away from incarceration to some real access to care will happen."

"Now you have people focused on their care in custody, till they can determine what needs to be done. So, you know, it's not just one thing with the diversion. It's 'what are we doing?' Before we get them in a car," said Heyman.

While there's more work to do yet Julie shares this, "to never give up to keep continuing to look for help even if you've had doors shut on you. To keep looking, you're not alone."