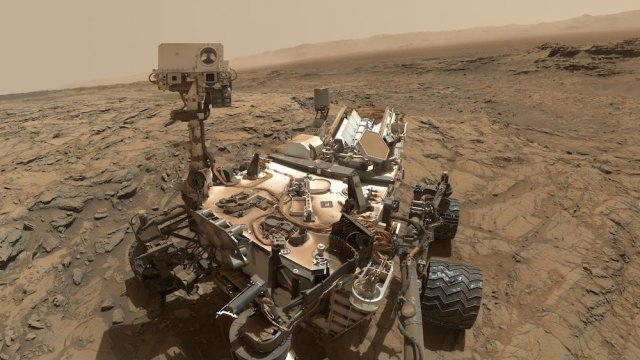 Curiosity has found more organic molecules on Mars. It's not proof that life ever existed there, but it helps the case.

NASA announced its Curiosity rover on Mars made another promising discovery in the search for life beyond Earth. When it drilled into a 3 billion-year-old rock in Gale Crater, it found organic molecules.

But "organic" doesn't necessarily mean life. Curiosity has found organics before, and each time, NASA explains that they aren't enough evidence on their own for life as we know it. They can come from chemical reactions or hitch a ride to the surface on a meteor or comet.

But it is possible that where these molecules exist, life might also have been close by. Some of what NASA found looks a lot like what phytoplankton release into Earth's atmosphere, or the byproducts of organic things that decay in a swamp or marsh.

And when scientists compared these molecules to those from Martian meteorites that landed on Earth, they found they might be fragments of even more complex compounds.

Life as we know it requires these complex molecules to create things like carbohydrates and proteins. Since we assume life elsewhere would be arranged the same way it is on Earth, that could make Mars a more likely candidate to have harbored life at some point.

Mars' Toxic Surface May Prevent Humans From Living There

Humans are trying their best to colonize Mars, but there are still a lot of uncertainties — like whether we could survive on the planet's surface.

And billions of years ago, when the rocks in Gale Crater were younger, Mars might have looked a lot different. Scientists think it probably had a much thicker atmosphere and might have even supported liquid water on the surface. Earlier research even suggests Gale Crater might have been habitable around that time — not unlike the conditions on an early Earth.