Curiosity Rover Finds New Signs Of A Lake On Mars 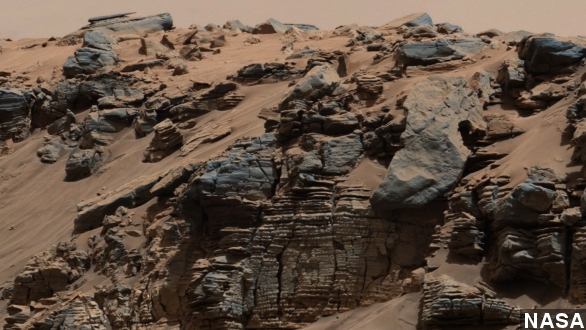 Data collected from NASA's Curiosity rover suggests Mount Sharp was shaped by sediments deposited in a lake over tens of millions of years.

NASA now has new clues the Red Planet could have supported life — microbial life, that is.

This is Gale Crater. It was formed some 3.5 billion years ago when a meteor crashed into the surface of Mars.

In the center of the otherwise barren crater is a formation that, until now, had stumped scientists — a 3.5-mile-high mountain known as Mount Sharp.

After studying two and a half years of data collected by NASA's Curiosity rover, scientists have found layers of bedrock that looked a lot like those found at the type of river deltas you'd find on Earth.

NASA believes these hundreds of rock layers alternate between lake, river and wind deposits. These sediment deposits accumulated over tens of millions of years to form Mount Sharp.

This is huge because it calls into question the widely held idea that wet conditions only existed underground on Mars. (Video via NASA)

In other words, if the climate allowed for a lake, it's possible rain or even an ocean could have existed on Martian soil. (Video via NASA)

Or as one NASA scientist put it: "Knowledge we're gaining about Mars' environmental evolution by deciphering how Mount Sharp formed will also help guide plans for future missions to seek signs of Martian life."

The data collected by Curiosity is part of NASA's ongoing preparation for a human trip to Mars in the 2030s. (Video via NASA)