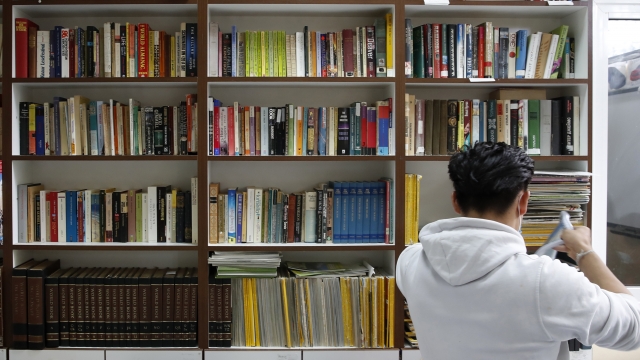 More schools are policing what can be taught, from discussions of gender identity to race.

Across the country, what’s being taught in the classroom is becoming increasingly political.

In school districts nationwide, the debate over what public school children can read and learn is intensifying.

According to Education Week magazine, 17 mostly conservative states have recently imposed bans on what teachers can say about race, gender and sexuality.

Scott Galvin is the director of Safe Schools South Florida, an organization opposed to the sunshine state’s new ban on discussing gender identity and sexual orientation in the classroom.

“Am I allowed to ask kids about pronouns when they're introducing themselves?" Galvin asked. "Can I put rambling rainbow flags up in my school?”

Critics have dubbed the ban "Don’t Say Gay." For now, it applies to grades kindergarten through third.

Gov. Desantis says the ban is needed to stop what he calls “woke indoctrination” that marginalizes the role of parents and pits people of different races against each other.

"No taxpayer dollars should be used to teach our kids to hate our country or to hate each other," he said.

Another new Florida law limits what teachers can say on racial issues and allows parents to sue teachers and school districts for perceived violations.

Some teachers fear these new laws will create a chilling effect.

“My concern all along has been the vagueness of it and the lack of just guidance and how it's going to be interpreted," said teacher Michael Woods.

But there are parents who say that making teachers think twice is a good thing.

“If you're not sure, then you're going to ultimately put your belief or your persuasion on that topic, so that's better left unsaid," parent Sean Sykes said. "There are things in here that that 100% should be taught at home.”

According to the free speech organization Pen America, over 1,100 book titles have been banned across 26 states over the last school year.

In suburban Muskego, Wisconsin, near Milwaukee, English teacher Kabby Hong put Julie Otsuka's “When The Emperor Was Divine" on the list for AP reading, but the school board committee rejected the book.

“When I read the board members' rejection of the Julie Otsuka book and their rationale as to why they rejected it, I was offended on so many levels," Hong said.

One board member argued it had been selected only because the author was not white.

"What I heard is somebody from the administration told the committee to pick a book from a nonwhite author," said Kevin Zimmerman, Muskego-Norway School Board member. "You can't have that. That's a protected class. You can't discriminate against a race.”

The book tells the stories of Japanese Americans interned in U.S. camps during World War II.

The school wars are not helping, at a time when teachers report record-low job satisfaction as a result of pandemic burnout and low pay.

Why Are Teachers Quitting?

School districts across the country are facing teacher vacancies due to teachers quitting and leave the industry.