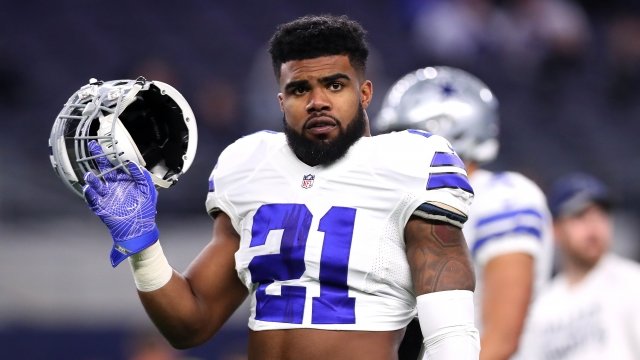 Star running back Ezekiel Elliott sued the NFL over his suspension. He claimed it was a "conspiracy" orchestrated by the league.

Dallas Cowboys running back Ezekiel Elliott is taking the NFL to court over his six-game suspension.

Elliott is suing after a yearlong investigation by the NFL concluded there was "credible evidence" Elliott "used physical force" on a woman he was romantically involved with in college.

Though he was never charged with a crime, Elliott still got a lengthy suspension. He's currently appealing it through the NFL's arbitration process.

His lawsuit alleges "there was a League-orchestrated conspiracy by senior NFL executives …  to hide critical information — which would completely exonerate Elliott."

It also says the NFL's head of investigations, Kia Wright Roberts, was the only one who interviewed Elliott's accuser and found that she wasn't credible. But her findings weren't used in the NFL's ruling.

The case won't look at whether Elliott actually did what he's accused of doing. It's only determining if the NFL followed its own discipline rules.

That means the case largely hinges on whether Elliott's side can prove NFL officials blocked Roberts from telling NFL Commissioner Roger Goodell about her findings.

It's tough to get the court to overturn an arbitration decision, as we learned when Tom Brady's four-game ban was upheld by an appeals court after initially being overturned in district court.

Elliott is seeking a restraining order to block the suspension from going into effect Sept. 2. He's hoping to have his ban blocked by Sept. 10 when the Cowboys' season begins.