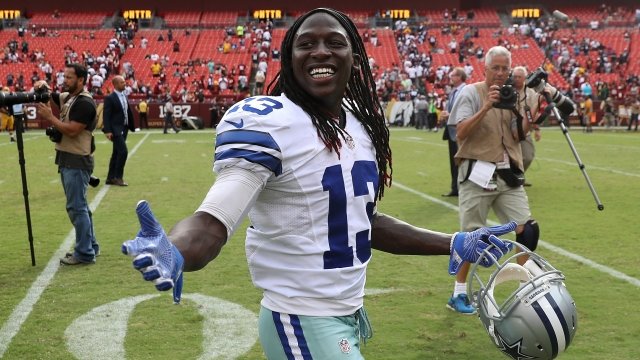 Dallas Cowboy Lucky Whitehead was cut from the team because a man used his identity after being arrested for shoplifting.

To say former Dallas Cowboy Lucky Whitehead is having a rough month would be an understatement.

Head coach Jason Garrett said the wide receiver/kick returner was cut because of a string of off-season incidents. But it doesn't seem like any of it was his fault.

NFL writer Ian Rapoport said the Cowboys' paperwork to cut him hasn't gone through just yet, but the team seems intent on parting ways with Whitehead.

The final straw seemed to be Whitehead's "arrest" in Virginia. Police said he shoplifted less than $200 worth of stuff from a Wawa gas station in June and skipped his court appearance. But that wasn't actually him.

Police said the real thief had no ID but gave officers "a name, date of birth, and social security number matching that of Rodney Darnell Whitehead, Jr.," Whitehead's given name.

The police who were duped will not face any discipline because they "acted in good faith."

Whitehead's agent tried to explain that he was in Texas at the time, but the Cowboys cut him anyway.

The other incident in question seems to be that his dog Blitz was allegedly kidnapped by Dallas-area rapper Boogotti Kasino and held for a $20,000 ransom.

The rapper said it was just a misunderstanding and, after an uproar on social media, returned Blitz back to his owner.

A Green Bay Packers fan filed a lawsuit after he said he was barred from wearing his team's colors to Chicago Bears events.

But apparently the doggy drama and identity theft were too much for the Cowboys. When asked about Whitehead, Garrett said, "We're going to stand by that decision and move on."

It's not all bad luck for Whitehead, though. His agent said several teams have shown interest in picking him up before the start of next season.