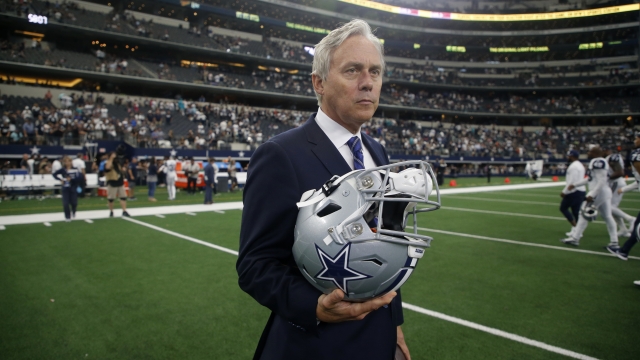 Four cheerleaders received nearly $400K over claims the team's former vice president was watching them undress in the locker room, according to ESPN.

The Dallas Cowboys paid a $2.4 million settlement after members of the team's cheerleading squad accused a team vice president of watching them undress in a locker room during a 2015 event at AT&T Stadium, ESPN reported Wednesday.

Each of the women received $399,523, the network reported, citing documents and unidentified people as sources.

At a press conference, Roger Goodell faced tough questions about his time as commissioner and claims of racist hiring practices throughout the league.

One of the cheerleaders said she saw Rich Dalrymple, the Cowboys’ longtime senior vice president for public relations and communications, standing behind a partial wall in the locker room with his iPhone extended toward them while they were changing, ESPN reported. He later told team officials he did not know the women were there and left immediately.

Dalrymple, who retired earlier this month after more than three decades of work with team owner Jerry Jones, issued a statement to ESPN denying the allegations.

“People who know me, co-workers, the media and colleagues, know who I am and what I’m about,” Dalrymple said. “I understand the very serious nature of these claims and do not take them lightly. The accusations are, however, false."

Jim Wilkinson, a communications consultant for the team, said the Cowboys investigated and found no wrongdoing by Dalrymple and no evidence that he took photos or video of the women.

“The organization took these allegations extremely seriously and moved immediately to thoroughly investigate this matter,” Wilkinson said. “The investigation was handled consistent with best legal and HR practices and the investigation found no evidence of wrongdoing.”

According to ESPN, a signed copy of the May 2016 settlement agreement includes a nondisclosure agreement in which the four women, three of their spouses and Cowboys officials agreed to never speak publicly about the allegations.