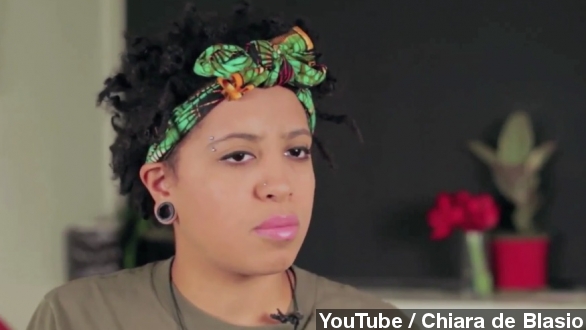 The 19-year-old daughter of New York City's next mayor spoke out Tuesday about her history of drug and alcohol abuse and how treatment helped her recover.

CHIARA DE BLASIO: "I drank and did drugs to share some common ground with people that I wouldn't have. ... Removing substances from my life has opened so many doors for me." (Via YouTube / Chiara de Blasio)

Chiara de Blasio and her brother Dante played a prominent role in their father's campaign this year.

CHIARA: "All of this attention? It's a good thing. As long as it's not your little brother." (Via YouTube / NYForDeBlasio)

As a progressive liberal, de Blasio stood out from other Democratic candidates in the primary fight both because of his policies and his family's sheer charisma. (Via CNN)

It's tough to take issue with Chiara telling her story in Tuesday's video — and in an email to supporters, her parents said it was meant to help people struggling with similar issues during the holidays. But it also raises a somewhat cynical question: is there another motive for releasing such a video now?

It certainly allows de Blasio's team to get out in front of what might be a controversial story and control the narrative in the week leading up to the mayor-elect's inauguration. The New York Times notes, "For months during the campaign, Mr. de Blasio’s aides declined to comment on rumors ... despite repeated inquiries from reporters."

The Democrat will officially take over from Michael Bloomberg as New York City's mayor Jan. 1.