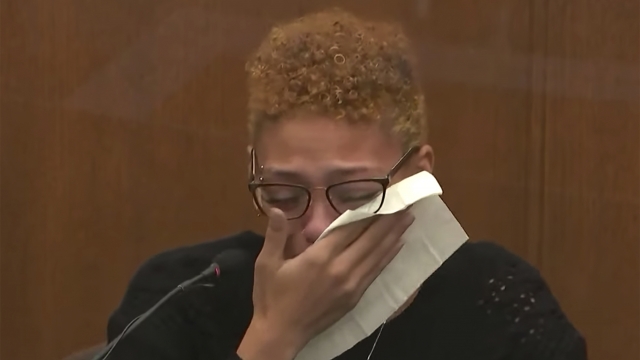 Kim Potter, 49, is charged with first-degree and second-degree manslaughter in Daunte Wright's death during a traffic stop.

The woman who was riding with Daunte Wright when he was pulled over by police testified Thursday about the chaos right after an officer shot him, saying she screamed at Wright trying to get a response but that he "wasn't answering me and he was just gasping."

"I grabbed whatever was in the car. I don't remember if it was a sweater or a towel or something … and put it on his chest like you see in movies and TV shows," Alayna Albrecht-Payton, who was Wright's girlfriend, testified. "I didn't know what to do."

Albrecht-Payton answered Wright's cellphone as his mother tried frantically to reestablish contact that she had with him right before the shooting. Wright's mother, Katie Bryant, testified tearfully on Wednesday that she first saw her son's apparently lifeless body via that video call.

"I pointed the camera on him," Albrecht-Payton said. "And I'm so sorry I did that."

Kim Potter, 49, is charged with first-degree and second-degree manslaughter in Wright's April 11 death in Brooklyn Center. The white former officer — she resigned two days after the shooting — has said she meant to use her Taser on the 20-year-old Wright, who was Black, after he attempted to drive away from a traffic stop as officers tried to arrest him, but that she grabbed her handgun instead.

Albrecht-Payton, 20, took the stand on the second day of testimony, after opening statements Wednesday in which prosecutors portrayed Potter as a veteran cop who had been repeatedly trained in Taser use, with warnings about avoiding such deadly mix-ups.

The defense countered that Potter had simply made an error. Attorney Paul Engh also said Wright might have averted tragedy if he had surrendered to Potter and the other officers at the scene.

Defense attorney Earl Gray pressed Albrecht-Payton on Wright's actions immediately after Potter shot him, in an apparent attempt to show that Wright deliberately tried to drive away even while gravely wounded.

Albrecht-Payton said Wright's hands "were never on the wheel" and that the car moved away from the scene because his foot was on the gas.

Gray also questioned Albrecht-Payton about the couple's activities before the traffic stop. She testified that they smoked marijuana that day.

Prosecutors also called the wife and the daughter of a man who was in a car struck by Wright's after he was shot, to testify about the toll the crash took on his health. Denise Lundgren Wells testified that her father, Kenneth Lundgren, had health issues before the crash but that his decline accelerated afterward. He is now in his 80s and in hospice care, she testified.

Video dominated the first day of testimony, with officers' body cameras and the police car's dashcam that showed Potter threatening to shoot Wright with a Taser as another officer tried to pull him out of his car. After she shot him with her gun, Potter can be heard saying, "I just shot him. ... I grabbed the wrong (expletive) gun!"

A car crash can be heard after Wright drives away and Potter — who Engh said had never previously fired her gun or Taser while on duty during her 26-year career — can be heard wailing uncontrollably afterward, "Oh my God. Oh my God!" before she crumples over.

A mostly white jury was seated last week in the case, which sparked angry demonstrations outside the Brooklyn Center police station last spring just as former Minneapolis Officer Derek Chauvin was on trial 10 miles (16 kilometers) away for killing George Floyd.

Engh told jurors that Potter made a mistake when she grabbed the wrong weapon and shot Wright after he attempted to drive away while she and the other officers were trying to arrest him.

The charges don't require proof that Potter intended to kill Wright, and prosecutor Erin Eldridge noted as much for the jury.

But Engh also told jurors that Potter would have been justified in shooting Wright even if she had consciously chosen to draw her handgun, arguing that deadly force was warranted to protect her fellow officers. He said police had reason to believe that Wright might have a gun and that one of the officers had reached inside Wright's car and was at risk of being dragged if Wright drove away.

In her opening statement, Eldridge told jurors that Potter violated her extensive training — including on the risks of firing the wrong weapon — and "betrayed a 20-year-old kid."

"This is exactly what she had been trained for years to prevent," Eldridge said. "But on April 11, she betrayed her badge and she failed Daunte Wright."

Potter, who told the court she will testify, was training a new officer when they pulled Wright over for having expired license plate tags and an air freshener hanging from the rearview mirror.

The officer Potter was training that day, Anthony Luckey, testified that during the stop, he smelled marijuana and saw marijuana residue on the car's console. He also said Wright didn't have a license and produced an expired proof of insurance that was under another person's name.

After discovering there was a warrant for Wright's arrest on a weapons charge and a restraining order against Wright, Luckey said he was going to put Wright in handcuffs and check on the welfare of the woman in the car, and that he asked Wright to get out.

But as Luckey tried to handcuff him, Wright struggled out of the officer's grip and got back into the car. Luckey said he was reaching into the car when he heard the gunshot, and that he then jumped back and saw Wright put the car in drive before it took off.

Gov. Tim Walz said Wednesday that he was preparing the National Guard to help with security if needed after the verdict.