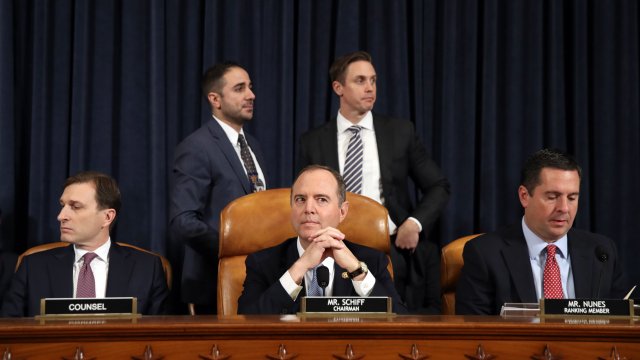 Closed-door depositions continue even after the start of public impeachment hearings.

Lawmakers are investigating new allegations in the impeachment inquiry, questioning another witness behind closed doors who allegedly overheard a phone call between President Donald Trump and US Ambassador to the EU Gordon Sondland.

Bill Taylor, the top U.S. diplomat in Ukraine, testified in the first open hearing in the impeachment inquiry, that a member of his staff overheard President Trump ask Sondland about the status of "investigations" during a cellphone conversation in a restaurant in Kyiv on July 26 -- the day after President Trump's phone call with Ukrainian President Volodymyr Zelenskyy.

That staff member? David Holmes, the counselor for political affairs at the US Embassy in Ukraine. He appeared for testimony under a subpoena.

Holmes testimony could be especially damning for President Trump, directly connecting him to an effort to pressure Ukraine to pursue political investigations in exchange for a White House meeting and U.S. military aid.

Holmes has been repeatedly recognized for his work as a foreign service officer. The Washington Post reports Holmes won an award in 2014 for raising concerns about then-president Barack Obama's policy toward Afghanistan.

Taylor told lawmakers he wasn't aware of the phone call until after he had given testimony behind closed doors. It's unclear why the call wasn't reported until now.

“I don’t recall - no, not even a little bit. The only thing - and I guess Sondland has stayed with his testimony that there was no quid pro quo," he told reporters.

Lawmakers will hold another closed-door hearing on Saturday. Questioning Office of Management and Budget staffer Mark Sandy. Members of the committees leading the investigation will likely ask Sandy about why OMB placed a hold on security assistance for Ukraine.