David Wright Is Back And So Are The New York Mets 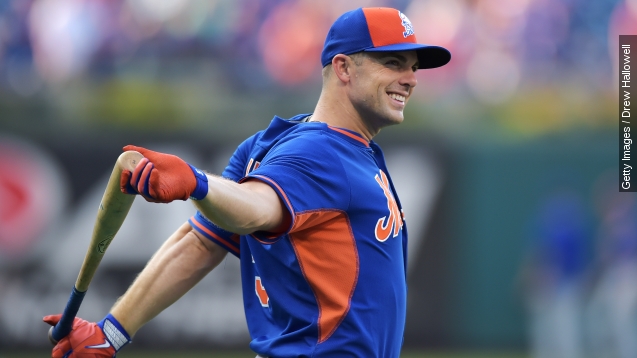 After missing 115 games, slugger David Wright returned to the Mets lineup Monday. With the extra hitting power, the team could make a strong run.

The Mets put on an offensive spectacle Monday night with a franchise record eight home runs. It was the first game back for third baseman after a 115-game absence for spinal issues. Wright picked up where he left off, homering on his first at-bat.

"The entire Mets dugout lit up. It was like 'Wow. Look what just landed at our feet.' It's almost like a midseason trade because he's only played the first handful of games in April," ESPN's Pedro Gomez said.

In Wright's absence, Juan Uribe and Daniel Murphy have filled in admirably at the hot corner, but neither has quite the impact Wright has traditionally shown. Granted, Wright is years-removed from his best at the plate, and his durability after an obscure baseball injury remains to be seen.

"You know, you break a bone, you fracture a bone, you pull a hamstring. There's normally a timeline. ... It's literally a week-to-week process," Wright told reporters in June.

The Washington Nationals have been sputtering since the All-Star break, so the Mets have a big opportunity to widen their first-place lead. And an offensive boost is sure to help.

New York's been fueled by its strong pitching staff all season, led by Matt Harvey and Jacob deGrom, with mid-season help from young arms Noah Syndergaard and Steven Matz.

The Mets haven't been to the playoffs since 2008 and haven't won the division since '06. In first place with some cushion and momentum at this point in the season? Yeah, it's a rarity.