Days Of Violence Leave At Least 87 Dead In Burundi 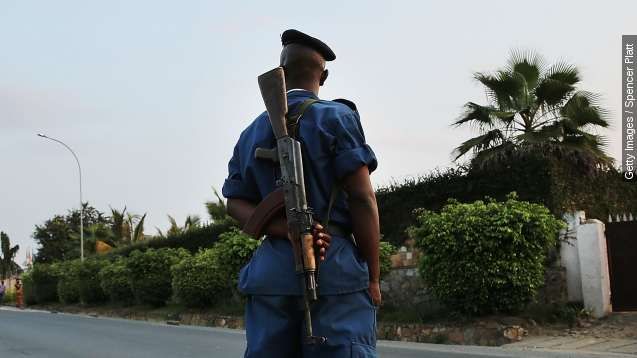 A series of attacks on military installations in Burundi has left at least 87 people dead, according to the military.

Dozens of people have been found dead on the streets of Burundi's capital following one of the worst incidents of violence the country has experienced in months.

Groups of armed gunmen stormed at least three military installations in the city of Bujumbura early Friday morning, prompting a series of firefights around the city for the rest of the day. Military officials put the overall death toll at 87, saying 79 attackers were killed and 45 captured.

The bodies in the streets were discovered the Saturday; it's not clear if they were included in the official death toll. Some witnesses blamed the killings on police forces loyal to the current government.

"They say members of a police unit known to be loyal to the president and the presidential guard went into people's houses, pulled people out of their houses and shot them in the street. Some of them had their arms tied together, others not," an Al Jazeera reporter said.

Burundi has been increasingly drawn into a cycle of violence since the country's president announced he would run for a third term, prompting an unsuccessful coup attempt. The violence has mostly been politically motivated, but there are fears this could become an ethnic conflict.

The UN Security Council condemned the attacks Friday and called on all armed groups in the country to lay down arms. The Human Rights Council is holding a special meeting on Burundi in Geneva next Thursday.