QAnon 'ReQovery' Meets Reality: U.S. Is Far Behind In Deradicalization 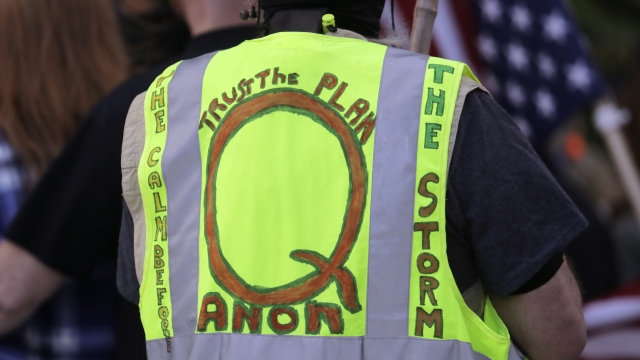 It was easy enough to fall for QAnon in 2020 — political leaders from former President Trump on down gave a gloss of credibility. Easy to get into — much harder to get out of.

"I didn't want people to think I was stupid."

Nineteen-year-old Leila Hay says she was scared of being judged for believing the lies — which start with liberal, Satan-worshipping pedophiles running the world and end with a fantasy that Trump would swoop in to save the day and stay in power. So even when she realized QAnon had isolated her from family and friends, she hesitated to get help.

Hay also turned to online support groups like ReQovery and QAnonCasualties, where she met moderator Jitarth Jadeja. A former believer himself, Jadeja says membership has doubled since the January 6th insurrection, but he questions whether his advice is enough.

"Let me be clear, leaving on your own is better than not leaving at all. But there are always the risks of not fully understanding what has happened. And we know in many cases, people who self-deradicalize run the risk of being radicalized again into a different group."

"Unfortunately, the United States is about 30 to 40 years behind most European countries when it comes to building de-radicalization programs or even the most basic support structures," he says.

"There's no systematic training programs when people are getting trained to be a psychologist, a psychiatrist, a counselor for how to work with this population," Hassan says.

The American Psychiatric Association confirms to Newsy it has no such program. But Hassan says each cult member needs a customized plan. And family members need support in reconnecting with loved ones cut off by QAnon.

"We need to really develop a large scale education program first with family members and friends, because they're the first line," Hassan says. "It's like, 'I miss you, where have you been?'"

The conspiracy theory suffered a serious blow when Donald Trump left office -- but QAnon experts say not enough people are disavowing the cult. For Leila Hay, after weeks of inner reflection, she decided to reach out.

"I started getting counseling, which was helpful. And also seeing my family more, talking to them more, was really helpful to bring myself back to reality," Hay says.

Experts warn the movement will adapt and grow. That means many people will need to find a way back to reality — for a long time to come.