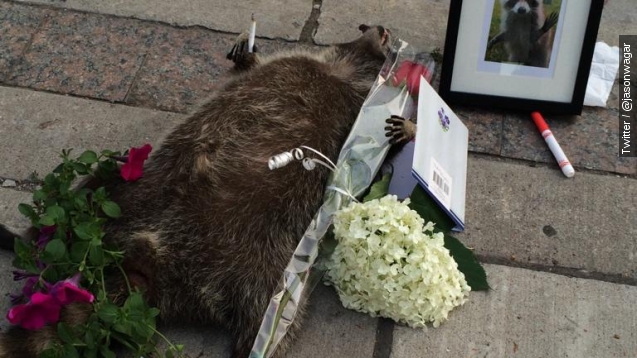 A dead raccoon on a Toronto sidewalk got a memorial fit for a rockstar after it took animal control 12 hours to clean up his body.

This is a photo of a dead raccoon on a sidewalk in Canada. Holding a rose. What? Totally normal.

This is a photo of that same masked marauder hours later — looking less like a pest and more like a dead rock star. There's a backstory, we promise.

It started when a concerned citizen tweeted to the City of Toronto about a dead raccoon on the sidewalk.

The city responded it had already been notified and animal control was aware.

And if the story ended there, we couldn't bring you a ridiculous photo like this. Just stare at that for a second. Take in the ridiculousness. Dead raccoon, loving notes, picture frame, candles ...

And since this is the Internet, the #DeadRaccoonTO was born.

When animal control still hadn't come to get the raccoon, that's when the, uhhh let's call it, "memorial" started piling up. It ended up being there the entire day.

The City of Toronto's Councillor, Norm Kelly, even joined in, saying residents were being asked to keep their green bins open in honor of the dearly departed critter.

Kelly, being the proper politician that he is, even sent condolences to the Raccoon family.

Toronto Animal Services finally addressed the masses as to why it took so long to properly, ahem, "bury" the raccoon, saying "injured, distressed or stray animals" are attended to first. And as we all know ... this little guy was already past that point.

We like to imagine he died valiantly, running in front of a car to save a baby in a runaway stroller. Now the memorial makes sense.

Conrad, as the raccoon has been dubbed, may also be helping another cause bigger than himself. People are being encouraged to donate to the Toronto Wildlife Center in his honor.

There's even a section to adopt a baby raccoon.