California Wildfires Continue To Burn As Residents Assess The Damage 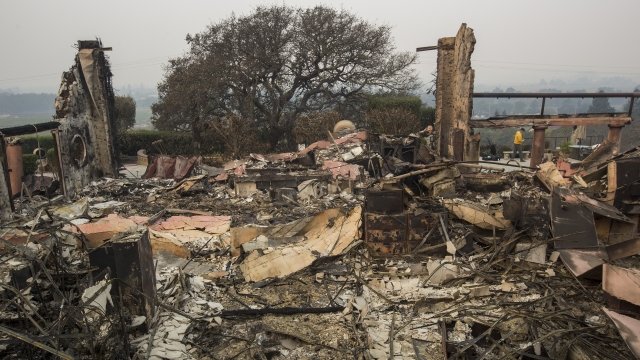 As of Wednesday the fires had burned nearly 170,000 acres and destroyed about 3,500 homes and business. At least 21 people have died.

After a series of deadly wildfires sparked in California, residents who lost their homes, businesses and even loved ones in the flames are starting to pick up the singed pieces.

The California Department of Forestry and Fire Protection said Wednesday morning the blazes had burned nearly 170,000 acres and destroyed about 3,500 houses and commercial structures. At least 21 people have died, and hundreds are unaccounted for.

Late Wednesday morning, Pacific Gas and Electric Company said approximately 53,000 customers were without power, and most of those outages are in Sonoma and Napa counties.

About 25,000 people evacuated when the fires started, and many mandatory evacuation orders were still in effect Wednesday afternoon.

But the worst might not be over just yet, thanks to windy and dry weather plaguing the region.

The National Weather Service expects "red flag" conditions to last until Thursday. And fire officials say that could hamper efforts to contain the flames in the coming days.