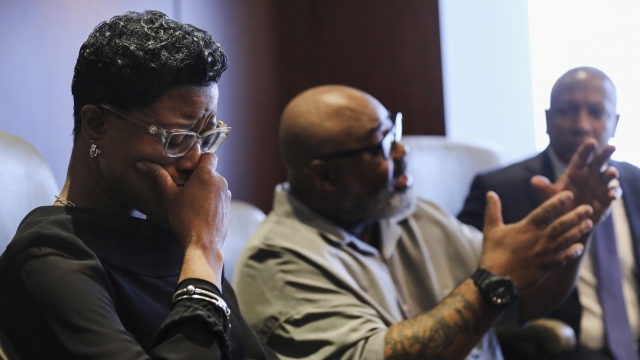 Because of climate change, deadly heat waves can strike just about anywhere, don't only fall in the height of summer and need not last long.

Temperatures barely climbed into the 90s and only for a couple of days. But the discovery of the bodies of three women inside a Chicago senior housing facility this month left the city looking for answers to questions that were supposed to be addressed after a longer and hotter heat wave killed more than 700 people nearly three decades ago.

Now, the city — and the country — is facing the reality that because of climate change, deadly heat waves can strike just about anywhere, don't only fall in the height of summer and need not last long.

"Hotter and more dangerous heat waves are coming earlier, in May ... and the other thing is we are getting older and more people are living alone," said Eric Klinenberg, a New York University sociologist, who wrote "Heat Wave: A Social Autopsy of Disaster in Chicago." about the 1995 heat wave. "It's a formula for disaster."

The Cook County Medical Examiner's office has yet to determine the causes of death for the three women whose bodies were found in the James Sneider Apartments on May 14. But the victims' families have already filed or plan to file wrongful death lawsuits against the companies that own and manage the buildings.

The City Council member whose ward includes the neighborhood where the building is located said she experienced stifling temperatures in the complex when she visited, including in one unit where heat sensors hit 102 degrees.

"These are senior residents, residents with health conditions (and) they should not be in these conditions," Alderman Maria Hadden said in a Facebook video shot outside the apartments.

Part of the problem, experts say, is that communities nationwide are still learning how deadly heat can be. In Chicago, it took the sight of refrigerated trucks being filled with dead bodies after the 1995 heat wave to drive home the message that the city was woefully unprepared for a silent and invisible disaster that took more than twice as many lives as the Great Chicago Fire of 1871.

That realization led to a system in which city workers start calling the elderly and frail, and turn city buildings into 24-hour cooling centers when temperatures become oppressive.

What happened this month is a reminder that the safeguards in place to make sure people don't freeze to death because they have not paid their heating bills often do not exist to prevent people from overheating in their homes.

"We have nothing for air conditioning," Hadden said.

"We recognize people need heating in cold weather and set up programs, financial assistance, to enable that but we don't do that for cooling," said Gregory Wellenius, a Boston University professor of environmental health who has studied heat-related deaths. "But subsidies for cooling are really controversial (because) for many people cooling is seen as a luxury item."

In Chicago, Hadden said the building's management company believed it was not allowed to turn off the heat and turn on the air conditioning until June 1, because of the city's heat ordinance. But while she said the ordinance has no such requirement, the explanation may at least be a signal that the ordinance should be amended to better protect vulnerable people from heat.

Wellenius said statistics show that while well over 80% of homes in cities such as Dallas and Phoenix have air conditioning, the percentage is far lower in cities like Boston and New York.

And in the Pacific Northwest, the percentage is even lower, something that came into stark relief in Oregon, Washington and western Canada last June, when temperatures climbed as high as 118 degrees Fahrenheit, killing 600 people or more.

There is encouraging news.

"More people have air conditioning and we are more aware of the health risks of heat waves," Klinenberg said.

Still, there is evidence that people don't appreciate or even know just how dangerous the heat can be.

In a study published in 2020, Wellenius and other researchers estimated that nationwide about 5,600 deaths a year could be attributed to high heat — eight times more than the 700 heat-related deaths that are study found were officially reported each year.

Wellenius said the reasons for what he called a "gross miscalculation" begin with the fact that official statistics are simply the result of counting death certificates that list heat as the cause of death.

In the county that includes Chicago, for example, the medical examiner's office reported two heat-related deaths last year, and seven the year before.

Just how many deaths in the U.S. are heat related today is unclear. Wellenius' study, published in 2020, is the result of research from 1997 to 2006. And Klinenberg said the issue has been complicated by the pandemic.

"It's hard to distinguish excess heat deaths from COVID deaths," he said.

Still, Hadden knows something must be done to deal with heat that can hit earlier and later in the year than it once did.

"We have to plan for this," she said.

Klinenberg wonders if cities will follow up on such talk.