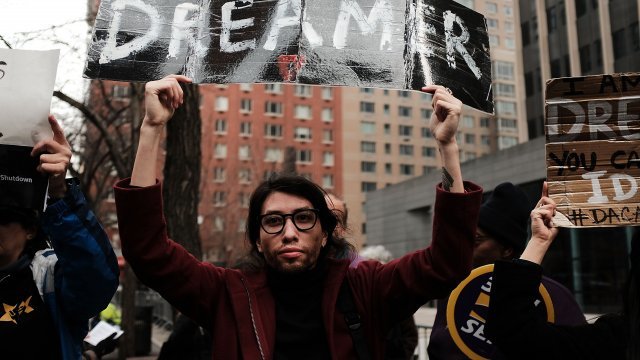 The Senate voted to start an open debate process 97-1.

The legislative debate on how to protect young undocumented immigrants known as "Dreamers" has begun in the Senate.

And the outcome is anyone's guess.

The Senate voted to kick off the debate 97-1, with Sen. Ted Cruz as the lone holdout.

It's the first official debate on the Deferred Action for Childhood Arrivals Program, or DACA, enacted by President Barack Obama and slated to end by March 5 by President Donald Trump.

The debate is also a follow-through on a promise Senate Majority Leader Mitch McConnell made to Democrats last month, well, almost. He said the Senate would vote on DACA by Feb. 8 in exchange for their votes to end the first government shutdown.

The interesting thing here is rather than going the typical route of leadership drafting a piece of legislation and bringing it to the floor, this bill is just a shell — essentially waiting to be shaped by the debate. The open process is expected to take up most of the month.

McConnell said of the process, "It will be an opportunity for a thousand flowers to bloom."

After the Senate takes the next step of calling a motion to proceed, any senator can bring up a proposal. The goal is to create a bill that can get at least 60 votes.