Michigan Is Host Of Democratic Debates – And Charter School Boom 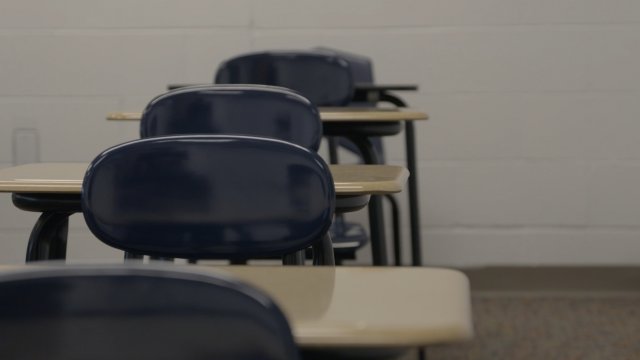 The state has had charter schools for nearly a quarter of a century. But some Michiganders are concerned about a lack of oversight.

When it comes to education, American students are in the middle of the pack. Not the best in the world. Not the worst. Just about average. Are charter schools a potential path to improvement?

Over the last quarter century, in one way or another, every state has grappled with how to integrate charter schools into its public system. Charters are run by private boards with private backing, but they're publicly funded.

Michigan lifted its cap on the number of charters in the state nearly a decade ago. Today, there are 300 schools in the state enrolling 150,000 students, according to an industry group. Michigan goes further than other states, allowing districts and charter schools to compete for students from other districts.

Public charter schools in Michigan, and across the country, are taxpayer-funded, getting a set amount of money per student enrolled. Right now, it's about $7,500 among the lowest in the country.

Here's how it works in Michigan: A student is assigned to the traditional public school in their community. But they don't have to go. They have choice. They can go to a different public school of their choice, or they can go to a charter. But wherever they go, those dollars follow them.

Thomas Pedroni is a professor of curriculum studies. He says the decision between traditional public schools and charters is especially difficult for parents in urban areas like Detroit.

Of the 85,000 Detroit children who attend public school in the city, 70,000 do not meet the state's criteria, according to a 2017 study. In Michigan, charter schools are regulated differently. In most states, the local Department of Education authorizes a charter school to enroll students. In Michigan, they're authorized mostly by outside groups, like a university or community college. Former Democratic legislator and now president of Michigan's charter school association Buzz Thomas says that's a good thing.

Unlike public schools, charters appoint their own boards. They're not elected by the public.

According to the state, 200 Michigan charters have been closed since 1995, including some in the middle of the year. The list of reasons include performance issues, attendance failures, even because of leasing agreement disputes.

Principal Hossep Trossian, who runs one of the more successful charters in Michigan, says the closures prove there's more oversight than in a traditional school.

In an effort to increase oversight, all schools in Michigan will begin receiving a letter grade of A through F this fall. The nonpartisan organization Education Trust-Midwest says 80% of charters in the state have achievement below the state average in reading and math, problems that mirror the traditional public system.

Six Michigan charter schools closed at the end of the 2019 school year. Four new ones are slated to open the next school year, and two more in 2020.