Declassified Cold War Papers Reveal Where US Was Ready To Attack 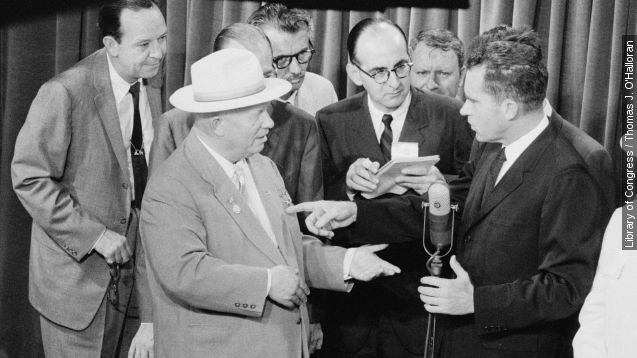 The U.S. was ready to bomb highly populated cities, according to the 1959 Strategic Air Command Atomic Weapons Requirements study.

Times were tense between the U.S. and Russia during the Cold War, but things never escalated into full-scale war.

If they had, newly declassified papers say the U.S. was ready to systematically destruct highly populated areas, with Moscow and Leningrad atop the list. (Video via U.S. National Archives)

The Strategic Air Command Atomic Weapons Requirements Study for 1959, uncovered and published by the National Security Archive, provides the most comprehensive and detailed list of the U.S.' Cold War plans to date.

The papers say the U.S. had plans to target "population" cities, including Beijing, Moscow, Leningrad, East Berlin and Warsaw.

The National Security Archive writes, "Purposefully targeting civilian populations as such directly conflicted with the international norms of the day, which prohibited attacks on people per se (as opposed to military installations with civilians nearby)." (Video via U.S. National Archives)

The U.S. supposedly wanted to focus on destroying Russia's air power, which appeared to be the biggest threat to the U.S. and its allies.

"The event of nuclear weapons changed the course of the world as well as the war. Since that time, all mankind has been struggling to escape from the darkening prospect of mass destruction on earth," John F. Kennedy said.

Moreso, the papers say the U.S. wanted to drop bombs "ranging from 1.7 to 9 megatons" on these air power targets. There were also plans to develop a 60-megaton weapon.

As the National Security Archive explains, "One megaton would be 70 times the explosive yield of the bomb that destroyed Hiroshima." (Video via U.S. National Archives)

The declassification comes from a 2006 records request from William Burr of the National Security Archive based out of George Washington University.

This video includes images from the U.S. Air Force, the U.S. Navy National Museum of Naval Aviation, the U.S. Department of Energy and Isabella lynn Lee / CC by 3.0.