Deepwater And Dolphins: The Oil Spill's Impact 5 Years On 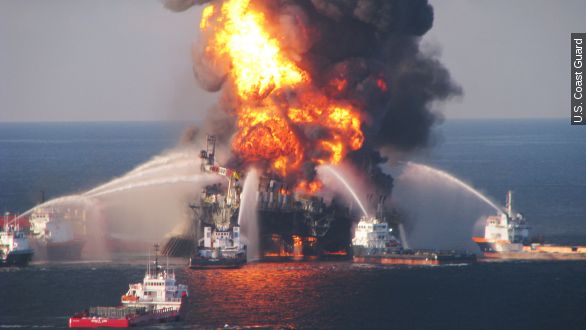 Five years on, the possible environmental impact of the Deepwater Horizon spill includes a sustained die-off of bottlenose dolphins, among others.

It's been five years since the biggest marine oil spill in U.S. history. (Video via U.S. Coast Guard)

The official cleanup ended more than a year ago, but while BP says the Gulf of Mexico is rebounding, scientists say it'll take decades to understand the spill's impact. (Video via American Military University)

The spill is linked to the Gulf's longest die-off of marine mammals, bottlenose dolphins in particular, in recorded history. (Video via National Oceanic and Atmospheric Administration)

Studies have noted an overlap between areas that saw dolphin die-offs and areas affected by the spill.

In the first breeding season after the spill, the Gulf saw 10 times as many dead baby dolphins wash ashore as usual, and research has pointed to the oil-induced death of their prey as one factor. (Video via Sea Shepherd Conservation Society)

The most visible, and arguably one of the most heart-wrenching, impacts of the oil spill on the environment was the toll it took on seabirds. (Video via Cornell Lab of Ornithology)

Between 600,000 and 800,000 birds are estimated to have died in the spill's aftermath, but the spill's effects are more pervasive than that. (Video via U.S. Fish and Wildlife Service)

Oil has suffocated mangrove forests along the Gulf, which — aside from already being threatened by climate change themselves — provide important nesting grounds for a range of birds. (Video via National Wildlife Federation)

Despite these impacts, BP's own report on the spill five years on says the Gulf is "rebounding." It points to water and sediment samples with low oil content and cites a range of factors that would affect the Gulf's environment that don't include the U.S.' biggest marine oil spill.

"Over millions of years, Gulf ecosystems also have adapted to consume and biodegrade oil released by the many natural oil seeps across the sea floor."

For comparison, the total natural oil seepage for the entire Gulf of Mexico is estimated at 154,000 tons a year. The Coast Guard estimates Deepwater Horizon spilled 735,000 tons in 87 days. (Video via RT)

Scientists say the scope of the disaster means it will take a long time to understand all of the impacts.

"We kind of look at it as a 20-year plan. But there are going to be questions answered about the oil spill in two decades, still," the University of Southern Mississippi's Jessica Kastler told the Sun Herald.

BP said in March it will continue to investigate potential environmental injury going forward and pay compensation, which it has and will continue to do as ordered by the Supreme Court. (Video via BP)