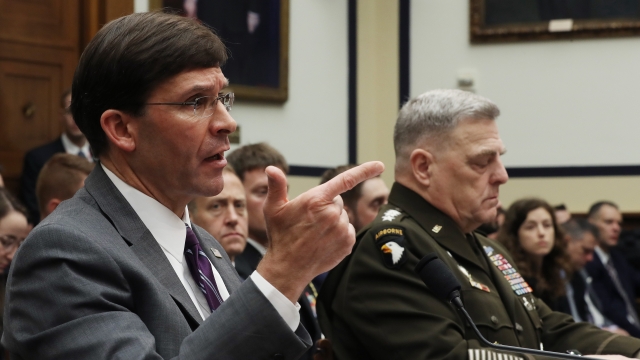 Secretary of Defense Mark Esper faced heat on Wednesday from lawmakers who object to the Trump administration redirecting military funds to the construction of the border wall.

Earlier this month, the administration notified Congress it would be diverting an additional $3.83 billion from the Department of Defense budget to the border wall.

While questioning Esper, lawmakers on both sides of the aisle in the House Armed Services Committee condemned the reallocation.

"This effort to keep stealing money for the wall is really undermining the Department of Defense, and is something, regardless of how you feel about the wall, we should have a bipartisan consensus that should not be done," Rep. Adam Smith said.

"This is a deeper issue than the wall. I support physical barriers on the borders. I support walls. But I am deeply concerned about where we are headed with the constitutional issue about Congress's role in national defense and whether that is being overridden," Rep. Mac Thornberry said.

Esper has argued that diverting money from the defense budget is appropriate because "border security is national security."

According to The Wall Street Journal, the government is looking to divert a total of $7.2 billion in military funding for barriers this fiscal year. This is on top of the $2 billion it requested from Congress in its budget proposal. The administration said it needs $18 billion to pay for about 1,000 miles of barrier.