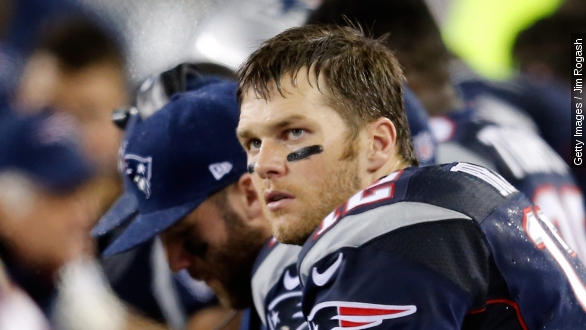 Now that the results of the NFL's investigation into "deflategate" are in, the focus of the debate has shifted to Tom Brady's rumored suspension.

Despite no official comment from the NFL, the conversation about Tom Brady and the "deflategate" scandal has shifted to not "if" but when and just how long the Patriots quarterback will be suspended.

That speculation comes from a New York Daily News report that cites anonymous sources saying there is almost no question that Brady will face a suspension but stops short of saying how long the suspension will be.

This speculation follows the release of Ted Wells' report saying, "It is more probable than not that Tom Brady was at least generally aware of the inappropriate activities of ... involving the release of air from Patriots game balls."

That report, released Wednesday, doesn't say Brady was the one who deflated the balls in a playoff game against the Indianapolis Colts last season but was likely aware it was happening. No blame was placed on the Patriots coaching staff.

Brady spoke at Salem State College in Massachusetts Thursday where he was asked about the findings. But he didn't give much of an answer, instead laughing off the question.

Jim Gray said, "There's an elephant in the room."

"Is there?" Brady replied.

The next day Brady's agent issued a statement calling the 243-page Wells report a significant and terrible disappointment, claiming it omitted key information.

Anchors for NFL Network said, "His agent did his job in other words in denying. Brady did not deny."

"Brady did not deny and I think that's what surprise me the most."

If the NFL does end up punishing Brady it might find itself in a weird place if it wants to suspend him for longer than a few games.

After all, when video surfaced of Ray Rice punching his girlfriend in the face, commissioner Roger Goodell only doled out a two game suspension. So giving Brady more than that could seem like the NFL was saying Brady's offense was more serious than a domestic violence incident.

But cheating is cheating and it looks even worse when your team goes on to win the Super Bowl.

Estimates for Brady's suspension have been all over the map. Some have called for an entire season and others say a two to four game suspension is more realistic. That is if Brady suspended at all.